Ayushmann Khurrana settles on Rs 3.5 crore deal for an advertisement

Ayushmann Khurrana usually charges 90 lakh to 1 crore for an ad, but the brand value has soared high after he bagged the National Award for Best Actor 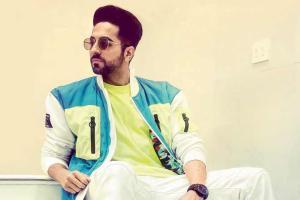 
The market and brand values of Ayushmann Khurrana has soared after he bagged the National Award for Best Actor for Andhadhun (2018). A few days ago, he shot for a TVC as an ambassador for a security solutions brand. He usually charges Rs 90 lakh to Rs 1 crore, but this time his team told the home lockers folk that he would not settle for anything less than Rs 3.5 crore! The actor, who got his price, shot for the ad at a Malabar Hill bungalow. So what will he charge for his next film? His team is already doing the math, filmmakers please note.

As the actor will be seen portraying the role of a voice-artist in Dream Girl, Ayushmann said in an interview with mid-day: "I had to deliver 25 per cent of my dialogues in a woman's voice. Since I come from a radio background, it's easier for me to modulate my voice. I have spent years behind the mic, mimicking different people. Raaj had given me the references of a few men, who prank people by talking like a woman. I studied those videos extensively."

"The biggest challenge was to crack the right note. As a guy, I have a natural [deep] baritone and that makes it difficult to sound convincing as a woman. To transition between voices was challenging, but it wasn't one bit exhausting. I am naturally drawn to different characters, so this was an adventure," the actor added.

In a media interaction during the trailer launch of the film, Ayushmann said: "In our country, there has been a tradition, whenever Ramleela happens, a boy becomes Sita. But we never gave this any importance. This doesn't happen anywhere but in India. I want to do films which tell our lesser talked about stories".

"The character that Raaj has written is unbelievable. I don't think I've done any film being this fearless. I've usually played in subtlety but this one is out there and a lot of fun," he concluded.

Speaking about Dream Girl, the movie is set against the backdrop of Mathura. Dream Girl is a comedy of errors with an ensemble cast of Annu Kapoor, Vijay Raaz, Abhishek Bannerjee, Manjot Singh, Nidhi Bisht, Rajesh Sharma, Raj Bhansali among others. The actor will be playing mythological characters, Sita and Draupadi, and lending a female voice to these characters, which adds a uniqueness to the storyline. Directed by Raaj Shandilya and produced by Ekta Kapoor, Shobha Kapoor, and Aashish Singh, the film is all set to hit the screens on September 13, 2019.

Next Story : Will Janhvi Kapoor star in Telugu film with Vijay Deverakonda?