Bhavesh Kumar: Climbing Up the Ladder

Bhavesh is currently shooting for his other film "Defaulters" 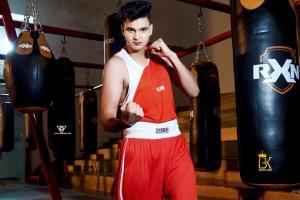 
Actor Bhavesh Kumar is all set for the release of his second film 'The Winds – Hawayein' hitting the theatres this Valentine's Day. Shot at around a hundred locations in India like Leh, Ladakh, Goa, Varanasi, parts of Rajasthan and many more majestic places, 'The Winds – Hawayein' is about the journey of a boy who has set out on a back- packing trip in order to explore the country and eventually himself in the process.

Upon asking him about how he felt as the release date is so close, Bhavesh Kumar said, "I'm expecting a lot of great things from Hawayein – it's my second film and it's completely different from my debut. As the film's premise might indicate, we've had to travel a lot for the shoots and I've given my 100 per cent and worked really hard to give the audiences a different side of me and to entertain them with my performance. I hope people appreciate it."

Further, we asked him what he wishes the audiences, especially the youngsters take away from  'The Winds – Hawayein', and he said, "I staunchly believe that until you explore every side of you, you are a stranger to yourself. To know who you really are and what you're capable of, you need to explore yourself, and in order to do that, one of the best things you can do is travel. In that sense also, I had an amazing time shooting for Hawayein and I can't wait to see people's reactions to it."

Bhavesh is currently shooting for his other film 'Defaulters'. This film's story is set in a college, where the central character is known to be a very mischievous, carefree and playful individual. His juvenile behavior becomes intolerable for his grandfather who brandishes an ultimatum at him to graduate sincerely or the consequences would be severe. How the boy has to put his nose to the grindstone and work hard towards his academics  forms the rest of the story. "There are a few surprising elements where the central character is thrown into unexpected situations, and I think the viewers would enjoy watching the boy's efforts to overcome the trials and tribulations he is faced with. There is also a very significant social message in the movie emphasizing the actual purpose of educational institutions against what has become a common assumption in the society," Bhavesh Kumar said.

Completing the triple hit is 'Love Science', Bhavesh Kumar's third project in line. 'Love Science' is a romantic film, with certain elements of drama and thrill to it, making it an interesting watch. The shooting for this film is yet to commence and Bhavesh Kumar is undergoing training to prepare for his role as a boxer in it. "Along with practicing with boxing coaches, I have received some pretty valuable lessons about the sport from my father as well who has been the National Boxing Champion of India for five times." Upon asking him about his father's reaction to him playing a boxer in his film, he said, "He has come to watch me a couple of times in training, and he told me that looking at me in action reminded him of his boxing days. I'm quite determined to do right by him and flawlessly justify my portrayal of a boxer in 'Love Science'.

Next Story : Tanhaji v/s Chhapaak Box Office: Who won the batle on day 1?