Gagan Puri directorial Doordarshan is definitely an ode to 80u00e2u0080u0099s era with contemporary settings. The story revolves around a middle-class Delhi family who has their work cut out with day to day struggle and a comatose mother. 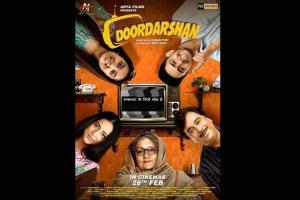 Gagan Puri directorial Doordarshan is definitely an ode to 80’s era with contemporary settings. The story revolves around a middle-class Delhi family who has their work cut out with day to day struggle and a comatose mother.

But one fine day, the comatose grandmother wakes up and open up a whole new set of struggles. The parents who have been bickering over their divorce are compelled to revive their marriage and keep the peace as the matron cannot be shocked into the current world. The family and friends goes the extra mile to recreate the late 1980s, complete with broken television and Doordarshan.

A slice of life comedy-drama about a Delhi family has been ruling the content genre for the longest. With Badhaai Ho, Shubh Mangal Saavdhan, to name same, Doordarshan is a well written and executed drama with messaging to subtle that it is sublime. The filmmaker pulls no heavy punches; he eases the audience into this world of quirky characters.

Especially the scene when Manu Rishi and Mahie Gill had to re-marry for the sake of grandmother. The couple is bickering and fighting on their second first night, which is hilarious.

The characters are well structured and direction’s selection of artist for particular roles, just shows that content works if the casting is right.

Mahie Gill as a middle-class housewife, who rides a bullet bike, is something we have not seen on silver-screen and yet feels a pang of jealousy about her husband might be having an affair, is multi-layered and memorable.

Manu Rishi is one heck of an actor; he just performs like miracle, regardless of any role. The aesthetics, dialogues and setting of the film feels right. Despite being a small budget content drama, the film has all the elements that of mega-starrer.

The film is bankrolled by Ritu Arya under Arya Films banner. The music is from Meet Bros.

Next Story : Posters out! Tiger Shroff is all set to star in Heropanti 2!