Farhan Akhtar apologizes to Shibani Dandekar at an award show

At a recent award show, the host passed a remark at Farhan Akhtar, which made Farhan Akhtar ask for forgiveness from his ladylove Shibani Dandekar, find out here what was the exact matter 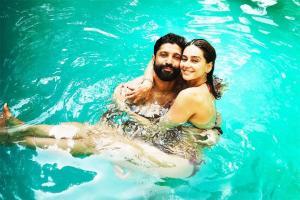 
At a recently held award function, Farhan Akhtar was awarded for being the Best Dressed Actor. While the Dil Dhadakne Do actor accepted this award, the host remarked how Farhan makes love to his suit. Knowing Farhan's sense of humour, he paused for a while and in jest, apologised to his ladylove Shibani Dandekar for unintentionally making love to his suit.

Farhan Akhtar and Shibani Dandekar are socially very active and do not shy away from sharing their cosy pictures on Instagram. The two often go on vacations and public events together. Their pictures scream love and so do their captions.

The two have been seeing each other for almost a year now and have always played the de-coding game with their fans by posting cryptic captions on their pictures. Reportedly, they have decided to take the plunge and seemingly the duo is planning a summer wedding this year. It was in Bhumi Pednekar's talk show, Tape Cast season 2 where Bhumi played a segment titled, 'Do Not Play cassette'. The cassette had Shibani popping out the marriage question to Farhan. She asked, "When are we getting married?"

Farhan Akhtar couldn't stop blushing and without dodging the question, he replied saying, "I don't know. Maybe April or May."

Speaking about being open on social media about his relationship with Shibani, Farhan added, "I mean, obviously you don't want to go like crazy and people are like please 'bass kar' but ya, it feels nice to share that because we are always living so sheltered and you are always so protected and your guards are constantly up; especially when it comes to people like your partner in your life and you don't want people to know. I just felt like it's rather nicer to share it with people and include them in the joy and let them feel happy, hopefully. Some might feel a bit jealous that she's with me."

Do we hear the wedding bells this summer?

Next Story : Ananya Panday gears up with a dual avatar for her films