Is this bald look of Akshay Kumar from Housefull 4?

A photo of Akshay Kumar, sporting a bald look has been circulating on social media 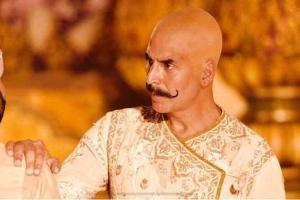 
For the past few days, Housefull 4 has been in the limelight for reasons more than one, courtesy - The MeToo campaign. After accusations of alleged sexual harassment on director Sajid Khan, and senior actor Nana Patekar, who has also been accused of alleged harassment by actress Tanushree Dutta, both of them ousted from the film. Following to these alleged charges, Sajid Khan stepped down as the film's director, and Nana Patekar released a statement saying that he has opted out of Housefull 4. The actor had already shot for portions of the film.

However, on the lighter side, a new photo of Akshay Kumar has been doing the rounds on social media. In the photo, Akshay Kumar is seen in a bald avatar, sporting a moustache. The look resembles Ranveer Singh's character from Bajirao Mastani. Although, one of Akshay Kumar's fan club has posted this snapshot and claim the photo to be his look from Housefull 4, which is a comedy caper. The fan club shared this picture and wrote: "#Exclusive The Second Look From #housefull4 of @akshaykumar Sir Is Out.. and It Looks Damn Hilarious And Fantastic [sic]."

Now, that Sajid Khan has stepped down as the film's director, a new director named Farhad Samji has taken over and will take the baton ahead. A statement released by the film's team read: "Director of 'Housefull 3', Farhad Samji, will now direct Housefull 4."

Housefull 4 is the fourth instalment of the comic franchise Housefull, and all the instalments have proven to be successful ones.