Answering questions about the sport, diehard fan Viaan Kundra flaunted his knowledge of WWE wrestling. It is, however, John Cena who actually makes the video interesting 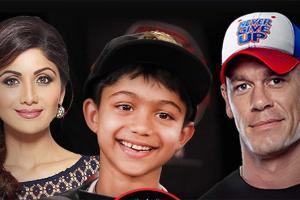 
Actress Shilpa Shetty Kundra's son Viaan recently appeared in a video where the six-year-old was seen expressing his love for the WWE superstars, particularly John Cena.

Answering questions about the sport, diehard fan Viaan flaunted his knowledge of WWE wrestling. It is, however, Cena who actually makes the video interesting. In the end, the star kid gets a special message from Cena.

"Hey Viaan, this is your buddy John Cena. I saw your video and your muscles. I had to get back to the gym and start working on myself. You are enormous. I can see you singing the song, 'My time is up, your time is now'. It's Viaan boy, you are shining now," Cena said in his message.

Sharing the video, Shilpa took to social media to express her joy.

"Omg! My son Viaan's first solo interview expressing his love for WWE and John Cena. I have no idea how he knows so much! Thank you WWE India for making his dream come true with that message," she tweeted.

Omg! My son @ViaanRajKundra s first solo interview expressing his love for @WWE and @JohnCena . I have noooo idea how he knows soooo much!!Thank you @WWEIndia for making his dream come true with that msg.. u00f0u009fu0099u008fu00f0u009fu0092u00aa https://t.co/teGxZc4I7r

Sharing her Bollywood journey, Actress-entrepreneur Shilpa Shetty Kundra said that her experience in the Hindi film industry was not an easy ride as producers threw her out of their films without giving any reasons. In a post shared on the official Humans of Bombay Instagram page, Shilpa, who made her debut in Bollywood with Baazigar in 1993, opened up about her journey and struggles she faced in the Hindi film industry.

Also Read: Shilpa Shetty Kundra talks about her fitness app; reveals how she looks like a million bucks at 43

Next Story : Imtiaz Ali: I had come to meet Deepika Padukone for Rockstar