Mouni Roy, who recently came back to Mumbai after being stuck in Abu Dhabi for over three months, has now flown to London for a film shoot, and admits of being petrified and nervous of filming amid such a sensitive situation! 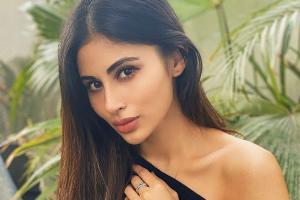 
Mouni Roy was stuck in Abu Dhabi for over three months due to the lockdown that happened after the outbreak of the Coronavirus pandemic. She finally got the opportunity to come back to Mumbai but since her work beckoned, has now flown back out of India, this time to London. She has already begun sharing her pictures from the city, have a look at one of her recent posts right here:

And speaking to Hindustan Times in an interview, she spoke about the challenges of shooting during such a crisis and how she is nervous and petrified of filming there. She said, "I am quite petrified and nervous as actors are the only people on a set, who wouldn't wear any masks or gloves while shooting or in a shot. But I was dying to work and be on a set, so we kind of have to get used to the new normal. Let's see how it goes."

She added, "It is my first time under the circumstances, so I will know and understand better as we start shooting. I have been promised that all the safety measures would be taken and social distancing would be practised on set. So, I am hoping for the best. One day at a time."

When asked about her flight experience and how it was travelling amid this atmosphere, Roy stated, "We are calling it the new normal while waiting for the new world but it's not just as much fun as it used to be. I used to look forward to the long flights as I like reading and watching movies and sleeping in between for 15-20 minutes every hour. But the experience was not like that at all."

She continued, "In fact, it was quite unnerving waiting at the airport and later on the flight. Guess, it will take some time getting used to this manner of travel, as this was the first time I travelled after the lockdown."

Roy made her Bollywood debut with Akshay Kumar's Gold in 2018 and was then seen with Rajkummar Rao in Made In China. She's now gearing up to become the antagonist of Ayan Mukerji's Superhero trilogy, Brahmastra, which also stars Amitabh Bachchan, Dimple Kapadia, Nagarjuna, Ranbir Kapoor, and Alia Bhatt.