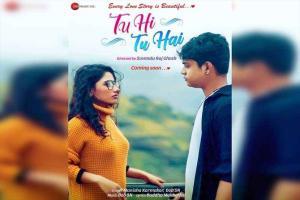 Director Suvendu Raj Ghosh, who has been very much in the news lately during the lockdown because of his upcoming films Main Mulayam has announced his next music video which has been released by Zee Music Company today. This soft romantic song is titled 'Tu Hi Tu Hai ', Directed by Suvendu Raj Ghosh, music composed by Bob Sn, sung by Manisha Karmakar & Bob Sn and lyrics penned by Buddha Mukherjee. This is the song of an innocent teenage love story. The lead debut starcast from the song Sukanya Datta, Saandy Hail and Lovekansh from a suburban area in Kolkata, West Bengal. They went through the complete process of auditions, screen tests and look tests in order to bag this romantic song.

It has been a long time since we saw the Rawness of Love being portrayed in the simplest manner. Actors have done their best to sway your heart in a beat. Talking about the music, the Director says, "I and Music Composer Bob Sn work a lot together and when he presented this song to me, I decided that this song can be utilised to portray a teenage love story. I have always been inspired by Yash Raj Chopra ji's style of shooting where he would capture the innocence of the teenage love and present it brilliantly. The looks, costumes and natural landscapes that he displayed in his work was just wonderful and that is what I wanted to translate in my work too".

Suvendu Raj Ghosh has been a big name when it comes to Music Videos, as he is known for making music videos in multiple languages. Having successfully delivered blockbuster music videos in Hindi, Bengali, Nepali, Marathi and many other languages, he has directed over 600 music videos so far. Congratulating the whole team on their efforts for spreading love and hope.