Sanjay Gupta: Music has a longer shelf-life than films

Clocking in 25 years in the industry today, filmmaker Sanjay Gupta on why he has always paid close attention to the soundtracks in his offerings 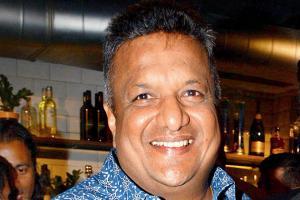 
Director Sanjay Gupta has never favoured the conventional, especially when it came to creating music. Delivering a crackling soundtrack in the gory Kaante and Zinda, he stood out from the melodic landscape that then defined the industry. In an interview with mid-day, he talks of staying in sync with the taste of the "MTV generation" and having faith in his choices.

What role do you think music plays in film-making?
Unlike today, when musicians simply record songs and send us [filmmakers] the demos, we would sit down with composers and take them through scripts and situations. Almost all great filmmakers have had an ear for music because music has a longer shelf-life than films. You may forget characters, but you won't forget good songs. Unlike my peers then, I enjoyed the process of creating a soundtrack. Often, I'd call my composers home for drinks and dinner, and then work on the soundtrack. It was like a party; you had to enjoy the process for it to [reflect on screen]. I'm also going to go back to that scale of music creation for my next, Mumbai Saga.

Also Read: Sanjay Gupta on his next: It's an action-comedy-drama, along the lines of a Rohit Shetty film

Which of your compositions were most dear to you?
When I turned producer with Kaante, I got the freedom that I required to create a soundtrack as desired. I took that film to big producers who turned me down stating that the film had protagonists aged 40+, had no humour or music. For them, a successful song implied something that was sung by one of the Khans, not an action star like Sanjay Dutt. But I knew I was going to create something special. Every day after work, Anand Raj Anand would come over to my home. We would discuss situations and he would come up with creations. We created two CD versions, one a club version, for which we upped the song's tempo, and another lounge version, for which we dropped it.
Similarly, for Dus Kahaniyaan, we created three CD versions. One of them included poems written by Gulzar, and recited by the cast. I took him [Gulzar] through the situations of the film and told him to write as he pleased. Then, cast members Naseer [Naseeruddin Shah] Shabana ji [Azmi], and Nana Patekar, among others, recited them against a soothing ambient score created by Bappa Lahiri.

Can you describe the making of the soundtrack of Zinda, which went on to be a best-seller?
That was a challenge because the film has a black and white palette. I commissioned a track to Strings and told them I needed a track that connects with the MTV generation. They made Yeh Hai Meri Kahani. Throughout the making of the film, no one in my crew was confident of the song. But I was. The video, where you had the cast jam together, also went a long way in enhancing the track. Zinda ended up becoming one among the best soundtracks of my careers.