Tanushree Dutta is planning to return to Bollywood after staying away for over a decade. Dutta claims that she has been offered Hindi and South films. 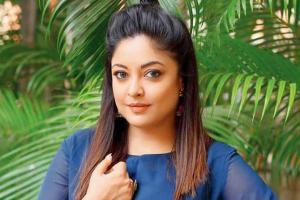 
Tanushree Dutta is keen to focus solely on her work now and does not want to be associated with "cheap, controversial and degraded people." She is planning to return to Bollywood after staying away for over a decade. Dutta claims that she has been offered Hindi and South films. "I'm in touch with three film managers, who are pitching me for big-budget South projects as well as casting offices in Mumbai. There are powerful industry bigwigs who are giving me silent support as they know the truth and are my well-wishers," said the actress, who wants to begin anew and stay away from controversies.

The news started floating in 2019 itself. The actress already started preparing her self by attending dance classes and has also been regularly going for swimming, yoga, and cycling, besides a few other fitness regimes all at once. Not only this, she has been actively involved in meditation and spiritual practices too.

Also Read: Tanushree Dutta: People are asking justice for Sushant, where is the justice for me?

As she is all set to get her mojo back, Tanushree shared in a media interaction, "I am definitely doing all the self-improvement sessions, but what is ahead in the future, let's all keep guessing so that it's a surprise when it actually comes out."

Speaking about the fit version of herself, Tanushree Dutta shared in an interview with mid-day, "During this period, I was living in the hills in the US. I had no access to Indian ingredients, and would hence eat European-style meals like soups, salads, and baked fish. For five months, I didn't even have sugar at home and did not consume milk. The place that I resided in allowed me to head for a walk, or go hiking in the hills, whenever I desired."

Next Story : What's upsetting Nimrat Kaur about her hometown, Delhi?