Vidya Balan stars in and as Shakuntala Devi, which released today, July 31 worldwide. The actress shared a photo of her watching the film at home. 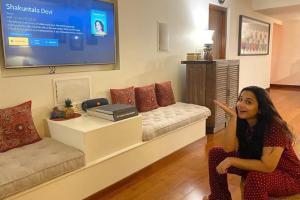 Vidya Balan shared a picture of herself at home, watching her movie on the telly. The actress also gave us a glimpse of her home through the photo, and we can see that her space is just like her - minimalistic and warm.

Sharing the picture, Vidya wrote on Instagram, "She is here. Meet #ShakuntalaDeviOnPrime now!!!"

Well, isn't Vidya Balan's excitement infectious? We can't wait to watch the film with the family as soon as the work day ends!

Did you know, the late Shakuntala Devi was very recently awarded the Guinness Book of World records certificate for 'Fastest human computation'? The fastest human computation is 28 seconds and was achieved by Shakuntala Devi by successfully multiplying two randomly selected 13 digit numbers at Imperial College London, UK, on June 18, 1980. The certification was received by Anupama Banerji. Isn't that amazing?

Produced by Sony Pictures Networks Productions and Vikram Malhotra, and directed by Anu Menon, Shakuntala Devi is now streaming on Amazon Prime Video. Will you be watching it over the weekend?