Vishal Dadlani, following his Twitter warning, on why composers must not touch his repertoire when remixing songs 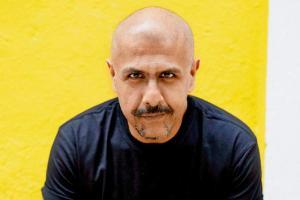 
In an industry where filmmakers are arguably discounting the need for creativity among music composers, choosing instead to make a fortune off rehashed songs of the decades gone by, Vishal Dadlani makes it amply clear that his repertoire is not to be messed with. "What should be the legacy of the composer becomes something anyone can toy with, without approval or permission, sometimes even without mentioning the original composer's [name]. That's disgraceful and unacceptable," Dadlani tells mid-day when prodded about his recent tweet in which he warned composers meddling with his compositions with legal consequences.

Dadlani and co-composer Shekhar Ravjiani's 2004 song Saki, was rehashed for Batla House, and — as has been with the recent remixes — topped several music charts, especially during the festive season. Referring to the recent slate of remixes, Dadlani adds, "Remixes are succeeding despite being weak rehashes because people are making them succeed. Labels are paying money to push them. Let's not forget that all these songs were already successful to begin with. A hit song becoming a hit song again is not an achievement. It's a given; a no-brainer. There's no effort or creativity. This can't work as a system. A creator and the creation must be perpetually linked, and the creator must have a say on how, when and why his/her work is [being] used."

Even though in an Instagram post, Dadlani had warned composers against using his creations without permission and remuneration, he alludes that monetary benefits are only one part of the issue. "I'd compare the emotional pain [of this situation] to telling a parent that if someone makes their child sing in trains, the parent will earn money. Most parents would be horrified at the thought because that's not the dream they had for their child."

Focus on the subject: James

Dino James is on a spree of releasing singles. Following the success of Nidarr and Faltu rapper, James is enjoying his biggest hit with Tandav, which has been raking in the views on social media. Referring to himself as one who isn't touched by contemporary trends in the rap scene, James says, "My method of working involves focussing on one subject that can garner attention. A lot of people cannot write on any given subject," says the rapper, asserting that the act of expression is an inherent talent. "It is the ability to focus on your experiences, endure pain and then express it [that makes or breaks an artiste]. Experiencing pain and expressing it are two different things. That's where one's talent comes into play."

1968: The Beatles' fascination with Eastern spirituality brings them to the ashram of Maharishi Mahesh Yogi in Rishikesh

Next Story : Harshdeep Kaur: All the musicians readily agreed to be part of it