This movie is, in fact, fully centred on the said agent's boss (Manoj Bajpayee), who very much kicks ass as the 'Aiyaary' - apparently an imposter who can change appearances at will. 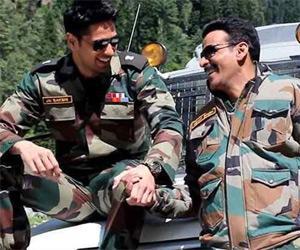 This thriller about a smart secret service agent (Siddharth Malhotra) cutting himself loose (gone rogue) in itself is so loosely cut (at 160 minutes) that you can't help but come up with conspiracy theories on how the filmmakers could've so horribly lost the plot.

For one, maybe a lot of censorship (whether real, or self-imposed) was involved for the filmmakers to meander all over all right, but eventually be left with very little left to say (or do)—so much so that let alone the suspense, even the 'reveal' hardly makes any sense. Which of course must deal with why, or how, a military intelligence officer supposedly turns against his own state.

We are dealing with national secrets. The officer has quite easily managed to bug the Army Chief's room, with a fake bug stuck on the wall (no less). He's similarly listened in on others in the top brass to realise that they're all louts, who're in it for the loot. What's he really gonna do about that? I've no idea.

So yeah, this ain't no James Bond's Spectre, or so many other Bond films (Skyfall, Casino Royale, Die Another Day, Quantum Of Solace), where 007 acts outside his remit for the greater good. If anything, this movie is, in fact, fully centred on the said agent's boss (Manoj Bajpayee), who very much kicks ass as the 'Aiyaary' - apparently an imposter who can change appearances at will.

Bajpayee singularly cracks this rather physical part—looking frickin' fine, super-fit touching 50. His character leads a special operative unit of the Indian Army that only the Chief has sanctioned, and is aware of. They take on curious cases in Kashmir and elsewhere.

We watch much of this happen with no relation to what they'll do in this film that is as much an excuse to enter the shadowy world of arms and crooked deals where, according to the movie, "14 per cent people pay tax" (which is much higher than the actual figure), and those on top have "aish" (fun with it).

You know where this 'A Wednesday' type common-man's angst is coming from. You simply don't know where the filmmakers intend to go with it. You'll, of course, go to the theatre because of the director (Neeraj Pandey), who has solidly proven himself in the genre in the past (Special 26, Baby). To be fair, the film is shot with much flourish, set in London and Lutyens' Delhi, over a chor-police kinda chase that works intermittently when the two lead characters meet.

For instance, in the first scene where Bajpayee explains how he takes life's major decisions when stuck at a crossroad. He tosses a coin. While the coin is up in the air, he realises exactly what his next step should be. It's a fine, intuitive lesson. The more significant question for a suspense-thriller though is if the penny drops at all—as simple as that. Sadly, in this case (for me), it didn't.

Watch the trailer of Aiyaary