Amitabh Bachchan, who is currently undergoing COVID-19 treatment at Nanavati Hospital lashed out at the trolls spreading negativity. 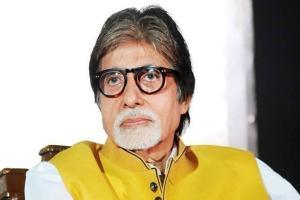 
Father Amitabh Bachchan and son Abhishek Bachchan are currently admitted to Nanavati Hospital after being tested COVID-positive have been updating their social media feed, either with their health updates or sometimes just thanking everyone for praying for their speedy recovery. But the duo are also forced to face trolls on social media who are not backing down from spreading negativity surrounding the entire crisis the family is currently facing.

This was followed by another tweet, in which the veteran actor wrote, "The pride of gentlemen is not diminished by the word of the wicked. The preciousness of a gem covered with dust is never destroyed."

Before this, father Amitabh too had reacted sharply to trolls in an open letter he wrote from the COVID-19 ward in a Mumbai hospital. He penned the note to anonymous trolls who have been wishing his death due to the novel coronavirus. "they write to tell me... 'I hope you die with this Covid". "Hey Mr Anonymous... you do not even write your Father's name,... because you do not know who Fathered you... there are only two things that can happen... either I shall die or either I shall live. If I die you won't get to write your diatribe anymore, by weathering your remark on a celebrity name... pity."

He added: "The reason for your writing to be noticed was, because you took a swipe at Amitabh Bachchan... that shall no longer exist... !! If by God's grace I live and survive you shall have to be 'weathering' the 'swipe' storm, not just from me, but on a very conservative level, from 90+ million followers."

"I have yet to tell them to... but if I survive I shall... and let me tell you they are a force incensed... they traverse the entire World... from the West to the East from the North to the South ... and they are not just the Ef of this page... that extended family shall in the flash of an eye become 'extermination family'!! All I shall say to them is... 'thok do saalon ko'."

A few days, Abhishek had also responded to a troll tried to throw nasty jibes at the actor. "Your father admitted in hospital... Ab kiske bharose baith ke khaoge? (who will feed you now)," the troll asked. The actor gave a befitting reply to the social media user. Abhishek, with his typically subtle wit, tweeted back, "Philhaal toh let let ke kha rahe hai dono ek saath hospital mein (For now, we are both lying down and eating together in hospital)."

Soon after, the user responded to the actor and said, "Get well soon sir... Har kisi ki kismat me let ke khana kaha..." The actor also replied to the tweet and wished for their healthy life. Abhishek wrote, "I pray that you are never in a situation like ours and that you remain safe and healthy. Thank you for your wishes, ma'am."

Aishwarya Rai Bachchan and daughter Aaradhya too had tested positive. The mother-daughter duo was under home quarantine for a while before being admitted to the same hospital. On Monday, both of them were discharged after testing negative.

Bachchan's well-wishers have organised prayers in various parts of the country including Madhya Pradesh's Ujjain, and Uttar Pradesh's Varanasi and Lucknow for the fast recovery of the 'Shahenshah' of Bollywood. Fans even performed 'yagya' in Asansol for his recovery.