Fan asks Tara Sutaria, "When is our wedding?" This is what she replies

A fan, in one of the recent interviews of Tara Sutaria, asked her about their wedding and this is what the actress had to reply. 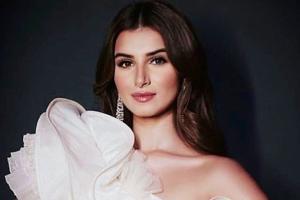 
It has been just a year for Tara Sutaria in the Hindi film industry and she seems to have established a solid fan base for herself, so much so that she has begun getting proposals from fans.

In an interview with Pinkvilla, during a fan session, when someone asked her "So when is our wedding?" she couldn't stop smiling and finally said this- "I'd love to meet you first. But till then, keep writing. After this virus goes and the horrible times are gone, we will meet. And you never know, I might take you up on this."

The actress, who has already acted in Student of the Year 2 and Marjaavaan, is now gearing up for Tadap with Ahan Shetty and Ek Villain 2 with John Abraham, Arjun Kapoor, and Disha Patani. She has also been signed opposite Tiger Shroff in Heropanti 2.

A spokesperson from the production house shares, "Sajid Sir saw the rushes of Tara's scenes in the Ahan Shetty debut film and was really moved by her brilliant performance. She is a great actress who would be a perfect match for the role in Heropanti 2 opposite Tiger Shroff."

Tara Sutaria and Tiger Shroff will reunite on screen after two years. Earlier this year, producer Sajid Nadiadwala had announced Heropanti 2, and with the second instalment of the action franchise, he has planned to take it to the next level in terms of scale, action and other aspects.

Tara Sutaria is in talks for another film with Aditya Roy Kapur called Om. A source close to the portal Pinkvilla said, "Tara has been approached for the Ahmed Khan film opposite Adi. She has liked the story but she is yet to sign on the dotted line."

It added, "It all depends on her schedule and the dates that Adi and Ahmed decide to shoot the film on. The film is tentatively titled Om. It's a high octane actioner and will also have Tara playing a pivotal action-oriented role."