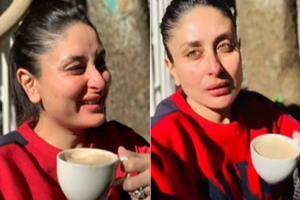 Kareena Kapoor Khan tries out the 'Reels' feature on Instagram


Looks like Kareena Kapoor is having fun trying out Instagram's various features. It hasn't been a very long time since Bebo officially joined the photo-sharing app, and she already has garnered over 5 million followers. Now, the Good Newwz actress keeps entertaining and treating her fans to stunning pictures and videos from her life.

Trying out the 'Reel' feature, Kareena shared a video of herself with a cuppa in her hand. The second-time mum-to-be looks absolutely radiant in the video, and we simply can't take our eyes off her! Check out the reel below:

How adorable is this video? Dressed in a casual red sweatshirt, Bebo seems to be enjoying the sunshine in Himachal Pradesh, where she is currently with hubby Saif Ali Khan and son Taimur.

Kareena Kapoor Khan, on the other hand, recently wrapped up her shoot for Aamir Khan's Laal Singh Chaddha. The film is an adaptation of Tom Hanks' Hollywood classic Forrest Gump. According to reports, Shah Rukh Khan is all set to have a cameo in the film, which will be directed by Aamir Khan.