Katrina Kaif plans to take a break on her birthday

Katrina Kaif will turn a year older on July 16. Her birthday plan is simple and sweet - go somewhere nice and just enjoy herself with sisters and friends 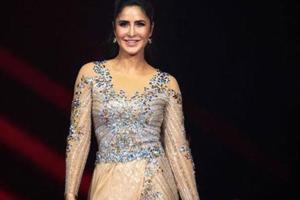 
Actress Katrina Kaif will turn a year older on July 16. Her birthday plan is simple and sweet - go somewhere nice and just enjoy herself with sisters and friends. Asked about plans for her upcoming birthday, Katrina told IANS in a telephonic interview: "I will most likely go out for a few days with some of my friends and sisters, taking a few days' break and go somewhere nice and just enjoy myself."

On the work front, the new brand ambassador of a sports brand in India is being lauded for her performances in movies Bharat and Zero. And she can't wait to get another role that will let her grow as an actor.

Talking about the association, she shared: "When it comes to Reebok, I think we both have a similar way of approaching fitness."

Also Read: This sizzling picture of Katrina Kaif in her workout gear will motivate you to hit the gym

She wanted to team up with a brand that she identifies with when it comes to fitness.

"Beyond movies also, fitness is a big part of my life. I think having a company like Reebok that has a similar approach and way of thinking about fitness, makes it a perfect fit," said the actress, whose fitness goals keep changing with time, role and film.

She shared that she believes in picking roles that allow her the "space and opportunity to really invest in a character and explore it".

"I am eager to get another film, to get my teeth into another character which will allow me the kind of level of performance which I was able to experience in Bharat and Zero," said Katrina.

As for her upcoming projects, she has an action film titled Sooryavanshi.

Also Read: The birthday countdown has begun for Priyanka Chopra and Katrina Kaif

Next Story : Shahid Kapoor: The audience is viewing films in right context