Aamir Khan to wrap up Laal Singh Chaddha shoot in Turkey and Georgia?

Laal Singh Chaddha makers are planning to head to Georgia and Turkey to wrap up the remaining portions of the Aamir Khan, Kareena Kapoor starrer. 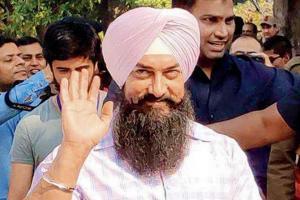 
There has been a lot of buzz about Aamir Khan and Kareena Kapoor Khan's upcoming film, Laal Singh Chaddha. Aamir began shooting in November 2019, eight months after the film's announcement. There has been a lot of talk about the star-cast and their looks. The lead actors and the crew keeps on sharing pictures and videos from the sets maintaining the curiosity level.

The unit had two major schedules pending in Delhi and Ladakh when the nationwide lockdown brought its shoot to a grinding halt in March. Later, the makers decided to cancel the Ladakh schedule in light of the India-China military standoff along the Galwan valley. Now, reports have emerged that Turkey and Georgia are soon going to be the locations for the pending shoot of this film. Speaking to The Times of India, a source said, "Advait Chandan (director) and Aamir waited it out for quite some time, but it's more than four months now since Coronavirus invaded and the number of cases is still spiking. How long can you go on waiting for a big canvas film like ‘Laal Singh Chaddha’? So, they have planned for Georgia and Turkey".

The source continued, "It now remains to be seen when the final wrap up will be possible. The movie is working out very well and keeping the flow in mind, it is imperative that the balance part is rolled out ASAP".

Earlier, mid-day had reported that Aamir Khan had called off Laal Singh Chaddha's schedule in the region following Sino-India clash in Galwan valley. Khan had also informed the co-producers that he does not wish to put the cast and crew at risk by resuming shoot. "With many of Aamir's staff members testing positive for COVID-19 last week, the actor is all the more certain that he will not return to the set until the situation is under control. He also pointed out that some countries that opened up are now experiencing a second wave of the virus. Though a significant portion of the movie remains to be filmed, the creators and the studio have unanimously decided to exercise caution and hold off the shoot for now", a source said to mid-day.

The film, also starring Kareena Kapoor Khan, is an official adaptation of Tom Hanks-starrer Forrest Gump (1994). It was originally slated for a Christmas 2020 release but has now been pushed to 2021.

Laal Singh Chadha marks the bringing together of Aamir Khan with Kareena Kapoor Khan. The chemistry between the stars was loved by the audience in their first film 3 Idiots, and now years later they are set to take over the screen with their crackling chemistry once again. The film went on floors in the first week of November. Aamir's mother Zeenat Hussain gave the mahurat clap.

Written by Atul Kulkarni, the film is being directed by Advait Chandan and is produced by Viacom18 Studios and Aamir Khan Productions. The movie is slated to hit the theatres during Christmas 2020.

Next Story : Vidya, Aamir, Hrithik: Actors who graced the biopics