Master of all! Shibani Dandekar is all praises for beau Farhan Akhtar 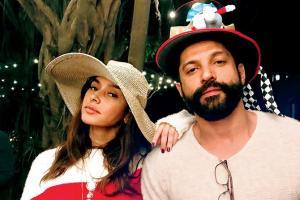 
Shibani Dandekar describes beau Farhan Akhtar as intelligent, creative and artistic — and not necessarily in that order. On Sunday, she conducted a Q&A with followers on Instagram. When asked about Farhan Akhtar, she replied, "Literally the most artistic, intelligent, creative person I know! Writer, director, actor, producer, singer, I can't decide as skill level and vision are beyond. What a mind."

Dandekar could not resist from heaping praise on her multifaceted beau. Along with it, she posted a picture of Farhan.

Farhan Akhtar and Shibani Dandekar have been in a relationship for over two years. Farhan was previously married to Adhuna  Bhabani with whom he has two daughters Akira and Shakya.

Also Check Out: Farhan Akhtar and Shibani Dandekar's quarantine pictures will give you serious couple goals

On the work front, Farhan Akhtar has been gearing up for his next, Toofan, which is a boxing drama. Directed by Rakeysh Omprakash Mehra, Toofan also features Paresh Rawal and Mrunal Thakur. The project marks the second collaboration for Akhtar and Mehra, post Bhaag Milkha Bhaag, the 2013 biopic on legendary Indian athlete Milkha Singh.

Akhtar has dabbled with almost all the facets of the Hindi film industry. Right from direction to production to acting to singing to hosting television shows, he has done it all. His last film as an actor was The Sky Is Pink, and now as far as his directorial film is concerned, the entire nation seems to be waiting for Don 3!

Next Story : Not without Shah Rukh, say Bad Boys For Life directors