It’s SRK's return to the big screen, in a lead role in 'Pathaan', in four years—having delivered a bunch of duds before that. You can tell how hard he’s worked for this comeback 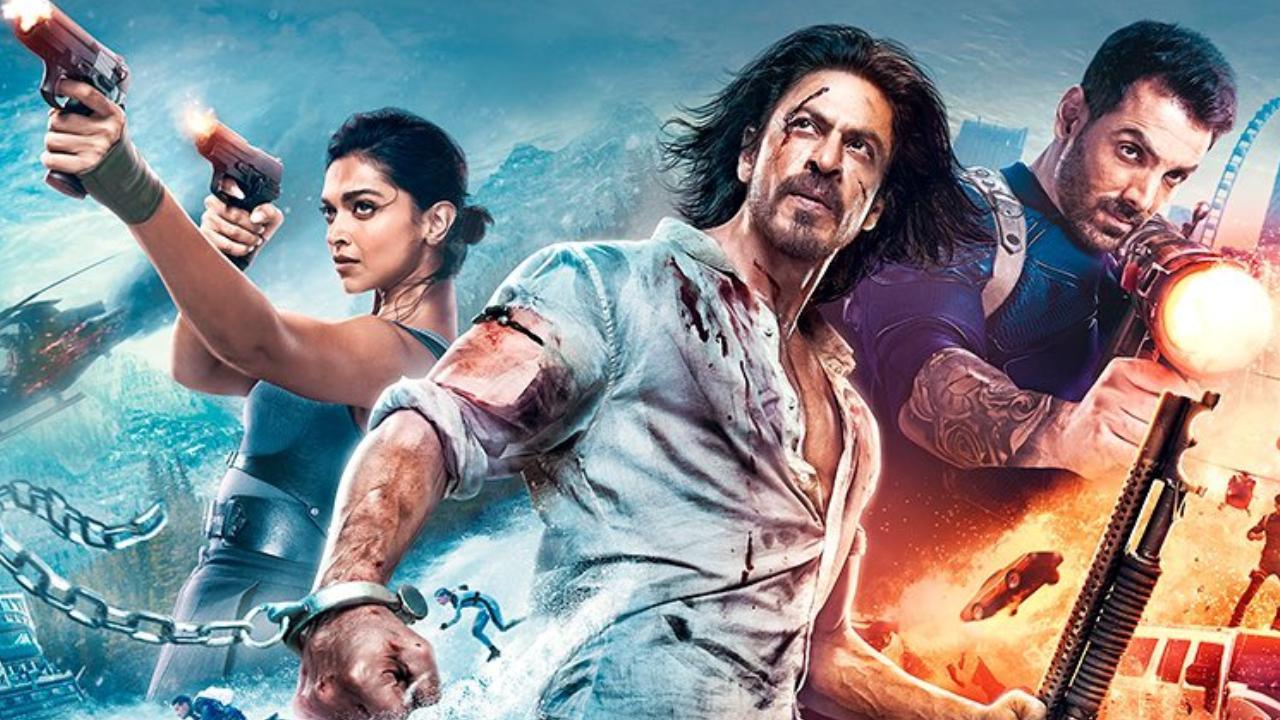 If you must know, the ISI (Deepika Padukone) and RAW (Shah Rukh Khan) seem to be working together in Pathaan! On what mission, exactly, at the point we meet them, first? That I won’t tell you. Not because it’d be a spoiler. But because I couldn’t tell/figure! What we do know is that unlike Ek Tha Tiger (Katrina Kaif, Salman Khan), this isn’t an Indo-Pak, inter-agency romance. Sure, sparks fly here and there—love/sex is not the action you stepped into the theatre for!

Barring the beautifully shot/composed bikini song ‘Besharam rang’, there really is no space in this picture for anything, but a series of stunt and chase sequences, starring the super-hero the film is named after. That is, Pathaan, making grand entries on every conceivable vehicle: helicopter, plane, train, truck, motor-bikes, skis, down to a wing-span attached to shoulders, so you can see, he can fly!

Also, these superhero-heroine-villain fly to every corner of the world to bring you this action, live, from Afghanistan, Russia, Syria, Spain, France, UAE…  Basically, if it’s the big-screen scale you were looking for? Eat this. Which is also a reason the film becomes hard to swallow, sometimes. It’s so frickin’ cut-to-cut.

The filmmakers appear so inherently insecure about somehow securing the audience’s attention—the eyes gallop from one shot of the hero, buried under a car, to him jumping on to a chopper, right in the next, unrelated scene, and so on, and so forth. Surely the climaxes— ‘ta-da-da tan ta-da-da’ continuously for background score—loses meaning, if an entire movie is a climax?

Let’s just say, by the end of it, I forgot where we’d started from. But you’re okay, so long as you stick to Shah Rukh Khan in long locks, muscles ripped, setting freakish fitness goals. This is possibly the best he’s looked onscreen, in his entire career. And he’s frickin’ 57. SRK is the spectacle! Even if he stars among many, including set-pieces, starting with the Dhoom-boy antagonist, John Abraham.

It's as if someone—and that’d be the producer, Aditya Chopra, who else—sat down with pen, paper, listing how many assets to add to SRK in the pic. Reasons to watch Pathaan: action, locations, plot twists, upping stakes, crazy weapons, chemical warfare, SFX (cheque, cheque, cheque).

In all of this, it’s almost a miracle that the movie eventually comes together at least somewhat coherently enough (most don’t). And for that you’ve gotta credit the basic writing, isn’t it: full-on hands-on director Sidharth Anand (for story), Sridhar Raghavan (screenplay), Abbas Tyrewala (dialogues). It’s the same lot that scripted Yash Raj’s last soldier-spy blast-fest, the equally stunning War (2019).

That said, what’s the movie about, really? Hah, let’s see: a gent of an agent, named Pathaan, of course. He’s from the Indian Army, but serves RAW—lining up a team of retired-hurt soldiers, only we don’t get to see them thereafter. Is Pathaan, Muslim, the ISI agent asks. He doesn’t know.
He was left behind by his parents at a theatre. Therefore, born in a cinema. As is this movie. And that’s where it belongs. Don’t fret then, even when motivations of the mercenary villain is a shifting goalpost.

All the more, you can’t possibly read heavily into the picture’s politics either, if there is much at all. There’s the usual patriotic sentiment of giving your life up for the nation. Expected from a Republic Day release. There is the mention of Article 370 repealed in Kashmir, that has got “extremist” elements within ISI thoroughly charged up to destroy India altogether. For once, though, a Pakistani could also be a sane person; and, indeed, an Indian can be a complete rogue.

It’s merely a comment on the times that even watching a simplistic mass-entertainer such as 'Pathaan' has seemed like a political act, leading up to its theatrical opening. A lot of it has probably to do with SRK, the super-star at the centre. Also, the actor with the largest female fan-base in India—who you hope (for him, for once) will show up for a mad-actioner as well!

It’s his return to the big screen, in a lead role, in four years—having delivered a bunch of duds before that. You can tell how hard he’s worked for this comeback.
What one did not account for, in the interim, is how important this picture would become—to get Hindi film audiences itself to return to theatres, post-pandemic. Pathaan has felt like a massive event, alright. On my IMAX screen, it lived up to it.

That explains Salman Khan as Tiger, from Yash Raj’s ‘spy universe’, jumping in with Pathaan to kick some Russian asses! Kabir (Hrithik Roshan, from War), it seems, couldn’t make it. What next: James Bond, Jason Bourne joining in?

Seetis simply don’t stop, at my 7.30 am, first day, first show. Movie-magic’s all there. Reviews/ratings mustn’t matter. On my way back, my cabbie wants to know: “Majboot hain? Mast?” Haan.