On Thursday, a new image of SRK from the sets of 'Pathaan' surfaced online. In the viral image, SRK is seen sporting a white shirt. He looks uber cool in a bun and sunnies 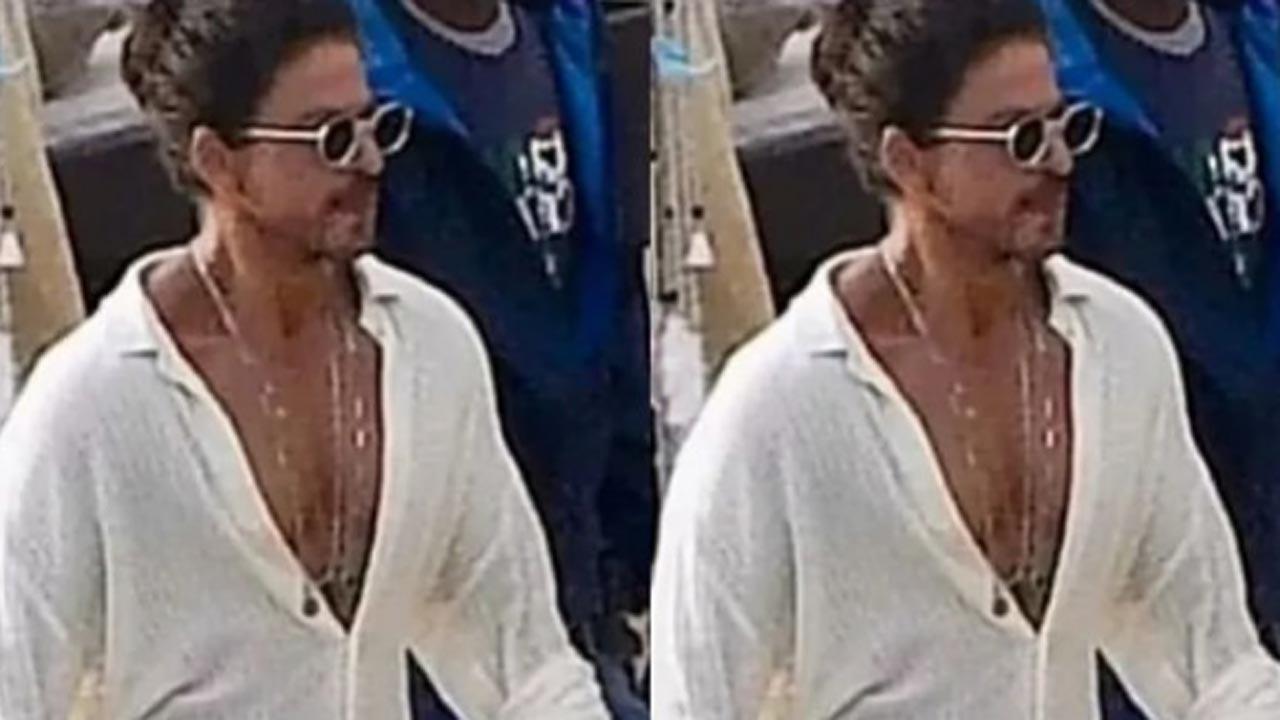 
One picture of Shah Rukh Khan is enough to make his fans trend him on social media.

On Thursday, a new image of SRK from the sets of 'Pathaan' surfaced online. In the viral image, SRK is seen sporting a white shirt. He looks uber cool in a bun and sunnies.

Reacting to SRK's look, a social media user commented, "Oh my God. Can't take my eyes off him." "SRK is the best," another one wrote. "SRK is back and how," a netizen commented.

On June 25, 2022, Shah Rukh completed 30 years in the film industry. Marking the special occasion, he did an Instagram live session, in which he revealed several details about his upcoming films.

He hinted that Salman Khan might be a part of a song in Pathaan, which also stars Deepika Padukone, John Abraham and Ashutosh Rana among others."With Salman Khan, there is no working experience. There is only love experience, happy experiences, friendly experiences and brotherly experiences. So, it is amazing whenever I get to work with him," Shah Rukh Khan said when a fan asked him his experience of working with the actor.

He continued, "We haven't done a full-fledged film together apart from Karan Arjun, which also was not full-fledged as we were not together in it for too long. So, we get to work four-five days in a year sometimes. Last two years have been fantastic as I got to be in one of his films. I had a couple of days role with Kabir Khan. And he came in Zero and did a song with me. Now, in Pathaan. I don't know if this is a secret but inshallah, I will try to in Tiger 3 also. So, it is great fun working with him."

Shah Rukh is also coming up with 'Dunki', which is helmed by Rajkumar Hirani and Atlee's directorial 'Jawan'.

Talking about this beautiful celebration of SRK on his special day, director Siddharth Anand explains, “30 years of Shah Rukh Khan is a cinematic moment in itself in the history of Indian cinema and we wanted to celebrate it with his millions and millions of fans globally. Today is Shah Rukh Khan day and we need to tell the world that. This is Team Pathaan’s way of saying thank you to Shah Rukh for the countless memories and smiles that he has given all of us in his incredible journey in cinema.”

He adds, “Shah Rukh Khan’s look from Pathaan was the most heavily guarded imagery. Fans across the world have been frantically demanding for his look to be unveiled for a long, long time now and we couldn’t think of a better day to reveal this to his fans and audiences. I hope people and SRK fans love his look from Pathaan.”

In the motion poster that dropped today, a gun-flexing SRK looks gritty and raw and ready for a dangerous mission. The look created mass hysteria as soon as it dropped on the internet.

About SRK’s look in and as Pathaan, Siddharth says, “He is the alpha man on a mission in this action spectacle that will hopefully set new benchmarks for the action genre in India. When you have Shah Rukh Khan in your film, along with superstars like Deepika Padukone and John Abraham, you have to reach for the stars in every department and I don’t think we will disappoint on that promise with Pathaan.”