Thappad takes you through a gentle ride with a lilting background score instead through a series of sequences, showing you first and foremost, how patriarchy is acceptably latent in the world we live in. 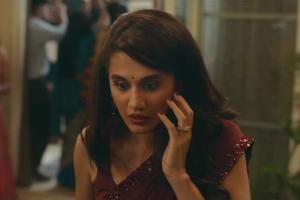 Taapsee Pannu in a still from Thappad trailer

There is something about a film named Thappad (which you're aware is what it is centred on), that right from the first frame, the anticipation of that titular slap starts to haunt you. Even while everything looks hunky-dory on screen. What you're equally mindful of is the fact that this is after all a picture on 'domestic violence'.

Let me tell you what most movies on that subject have ended up being, in their single-mindedness of shining a spotlight on that, and similar issues — deeply depressing. Rather rightly so. But eventually coming across as what you'd call the exploitative 'fem-jep' movie — about females in jeopardy, with an underlying hint of a knight in shining armour, eventually protecting the female, from the wrath of an altogether villainous male, or a male-dominated society, as it were.

Striking subtle, patiently engaging, Thappad, that first frame onwards, is none of the above. As a thoroughbred drama, it takes you through a gentle car-ride with a lilting background score instead —through a series of sequences, showing you first and foremost, how patriarchy is acceptably latent in the world we live in. To a point that we may not even be able spot it, even if it showed up like a huge hammer in a haystack. It's about the 'routineness' of it all.

Which is what makes this film so much about sensitisation, rather than hammering in a reality — once the bastion of virtue-signalling, 'serious' men/filmmakers. How does writer-director Anubhav Sinha achieve this? Mainly through suggestions. Whether that be in the relationship dynamics between parents and the child (male or female), and how that gets internalised in the way we conduct all our future relationship, with the opposite gender.

The Indian stigma still attached to the dreaded divorce (aptly pronounced as the unspoken pejorative, 'die-vorce'). Or indeed the financial (and emotional) independence of the woman that altogether pivots the scale either way. Class has a lot to do with it. As an audience, we survey all, in the same way that Shekhar Kapoor's masterpiece Masoom (1983) did, and just as delicately.

But more than anything else, this is about the male-centredness of it all. And let's not kid ourselves here — it's something that all men (consciously or not) have been perpetrators of (in some form or the other). And have sufficiently normalised as a result. Surely, you can see this movie as much as a mirror for men — whether you like it or not.

As a filmmaker with a sharp voice, this is Sinha's third film in a row that knocks open a fissure to reveal the rot within (when it comes to gender relations). It's pretty much using film as perfect opportunity to pick up and dust up a carpet, that's been hoarding clutter under it for centuries. With no signs of a let-up. The other two concerned religion (Mulk), and caste (Article 15).

Sinha's filmography before these read Cash, RA.One, Tum Bin, etc. Clearly there was a turning/decision point in his life as an artiste. Would love to know more. What's undeniable is his hold on filmmaking as a craft that, typically speaking, 'commercial' filmmakers have an advantage over their supposed art-house contemporaries — almost always.

This film has your attention. Because the characters do. And therefore the actors — the complete ensemble —do. Goes without saying, the female lead Taapsee Pannu does (hell, yeah). The male lead (debutant Pavail Gulati) probably pales in comparison. But that could also be because you're negatively inclined towards him as an audience. Sometimes we tend to confuse characters with actors, in our response towards them anwyay.

Have I seen a film on marriage as an institution, that's looked at it equally fairly, with a balance in the understanding of it, although in a different context? Yes, Noah Baumbach's Marriage Story. That was on Netflix. Watched it at home. It spun out slowly. Hitting you surely. Thappad unravels just as patiently. But might perhaps seem slightly stretched for 140 minutes plus, on the big screen. That said—guess there is no other way but to deep-dive this way.

Going back to the all-essential, anticipated Thappad. It's what the film revolves on, yes. But it occurs with hardly the sense of occasion you'd accord such a moment. It's like that scene from Shoojit Sircar's October, when the girl casually falls off that ledge, but the whole film is about it. It's a thappad. Just. A thappad. Or as the film's tagline says, "Bas itni si baat?" Well that is the whole point, isn't it?

Next Story : Saif Ali Khan: It important to learn something from your regrets