No, nobody's reopening any files for this, or getting rattled up to relook at laws (as was the case with the Oliver Stone masterpiece). A whole lot might just get bored, though. 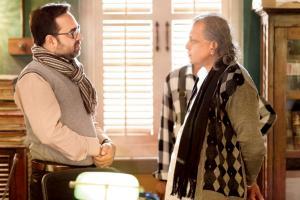 Guess who's watched Steven Spielberg's The Post (2017), based on the New York Times' Pentagon Papers revelation, given that an envelope filled with a certain case-file (in this film) mysteriously lands up on a newspaper reporter's desk, piquing curiosity, and leading finally to an exposé as front-page news the following day. There is also a gravelly voice of the unknown "source", guiding the journalist in this film, all through the case. The anonymous caller refers to the reporter as his Deep Asset. He seems more like Deep Throat himself.

And so the other mother of political-journalistic dramas, Alan Pakula's All The President's Men (1976), on the Watergate scandal, has also been dutifully checked. If anything, the brief for Naseeruddin Shah, who plays a wily minister, spouting one-liners on the murky art of politics, may well have been Kevin Spacey from House Of Cards.

That said, The Tashkent Files, beyond all else, is essentially modelled on Sidney Lumet's courtroom drama 12 Angry Men (1957), which was brazenly, blatantly lifted by Basu Chatterjee's Ek Ruka Hua Faisla (1986) - without any context whatsoever, given that jury trials had already been abolished in Indian courts by late '60s, early '70s.

To be fair, this film provides some background to why a grand-jury/committee has been appointed by the government - with that young newspaper reporter herself on board! Never mind. Actor Shweta Basu Prasad plays this lead role, and she does a fine job, by the way. So does everyone else - Mithun Chakroborty, Pankaj Tripathi, Prakash Belawadi, Pallavi Joshi, Mandira Bedi - in what's a rather fine line-up for any film.

The aim is to probe supposedly strange circumstances under which Lal Bahadur Shastri, India's second Prime Minister, died in his hotel/chalet in Uzbekistan (then USSR), after sealing a deal with Pakistan, post 1965 war. Was Shastri poisoned? Or did he die of cardiac arrest, as officially recorded? The group in the room delves into this mystery, presumably 53 years after the event!

Frankly, call it propaganda if you will, we must welcome this genre, regardless of the quality of recent output, that have mainly targeted folk from Congress - right from a tiny portion of Sacred Games (Rajiv Gandhi), to films like Indu Sarkar (Indira Gandhi), The Accidental Prime Minister (Manmohan Singh, Sonia, plus Rahul Gandhi) - putting faces to actual names, without fear, even if on account of (currying) favour.

Sure, this goes down well with the current dispensation, otherwise trigger-happy with censorship of all kinds, films foremost. The fact is that, barring notable exceptions, Indian, or at least Hindi cinema, has been bereft of robust political commentary, and an iron curtain has been lifted from an unexpected quarter.

God knows deaths of Shastri, or for that matter, Subhash Chandra Bose (also widely referred to in this pic) aren't the only local mysteries. There have been many question marks over possibly political motives behind several prominent deaths, some of them more recent: Haren Pandya, Lalit Narayan Mishra, Justice Loya, Gauri Lankesh … This is apart from a staggering number of politicians who keep dying in either car or copter crashes (Munde, Pilot, Scindia, etc).

The meat of the material (book-quotes, interviews) on Shastri's demise, before the writer-director (Vivek Agnihotri) - most of them apparently accessible to public - is however scant enough to be reproduced (as is, with a voice-over) in a 15-min video. Rather than sit through over a two-and-half-hour long feature, that in its effort to spin a thriller, instead of grabbing you by the eye-balls, throws up such garbled, gunny-bag gyanpatti, so much bak-bak, you constantly feel like stepping out of the hall of darkness, for a smoke break (no; don't wanna know what the filmmakers were smoking).

And so practically everyone sitting in this 12 Angry Men style committee is essentially a terrorist: "intellectual terrorist," (historian), "social terrorist" (NGO activist), "judicial terrorist" (retired judge), "TRP terrorist" (print journalist!), "racial terrorist" (someone who judges people for their religion, which incidentally is not a race anyway)…

If you must know more: There is call-back to 26/11 attacks, parliament attacks, CWG, 2G (scams)… So-called secular folk will apparently come with a fauj (army) to go after everyone in this country. "Bloody, heartless, capitalists," savages will kill us with fries and cola. And socialism is the ultimate evil, anyway.

This, coming from a filmmaker, who I'm told popularised the term "urban naxal" on Twitter, referring to the relatively affluent, who care for the completely marginalised - arguing that this is all done with the intent of destroying the 'nation'! Not going to judge him personally. He's allowed his hate/opinion, or general lack of empathy. Certainly not falling into that Twitter trap.

But this is the sort of know-all, grand con-spiracy theory picture - regurgitating catch-phrases like "presstitutes", "Lutyens Delhi," "fake news" - that emanates from a world-view wholly derived from spending far too much time on social media.

The gist of this juvenilia (that 15-min vid) is at best, currently Juhu-Versova's version of JFK then, ideally forwarded on your uncle's Whatsapp group. No, nobody's reopening any files for this, or getting rattled up to relook at laws (as was the case with the Oliver Stone masterpiece). A whole lot might just get bored, though. I'm just waiting for this genre to grow. Baby steps, I guess.