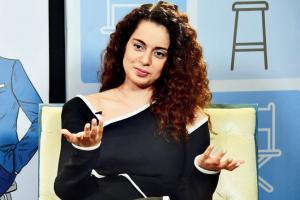 Kangana Ranaut, in a career spanning a decade-and-half, as an actor plus public-figure, has always been direct and abashed when it comes to her opinion which she has matched with her creative talents. In a conversation lasting much over an hour, Ranaut ran out a good bunch of her contemporaries, questioning their position as role models, given they seemed to her as such over-protected, pampered pieces of s**t. The entire video is uploaded on the Internet, and you must check it out.

In one segment of the interview, when she was asked about why she loves picking on people, Ranbir Kapoor, for example, is the fact that he does not like to comment on stuff which is political in nature, something he said on Sit With Hitlist. She said, "I do only that when I am rubbed the wrong way. And what is this thing of calling them young... Ranbir Kapoor is, what, 37 years old, young kid of the generation and Alia Bhatt just turned 27... my mother had three children at 27. This is absolutely unfair... bachche hai, ki dumb hai ki kya hai..."

She further added, "If we are asking about your sex life, that you are okay to discuss, put the pictures on Instagram, who I am f***ing, who I am not f***ing, that is fine; but about the country, 'it's my personal choice'."

But when questioned that Ranbir Kapoor was only talking about himself, she said, "These are people who feel absolutely exclusive, saying one has nothing to do with the rest of India. This is the kind of attitude that Karan Johar and gang thrive on. And a lot of negative PR about me has been happening from these people. Maybe you don't know, but I know who gives out news [about me]. That's why whenever I do something; it is to put them in their place. I am me, and you are you, is where the words 'nepotism', and 'outsider', come from. Because they feel superior to others. We need to question that, and the fact that I also know who had released that horse video. If I tell you the name, you will be shocked."

Also read: Kangana Ranaut: Pahlaj Nihalani gave me a photoshoot where I had a robe to wear, and no undergarments

Next Story : Shabana Azmi: Theatre is a great leveller