For her maiden appearance at Cannes, Priyanka Chopra Jonas to join Oscar-winner Julianne Moore on the red carpet 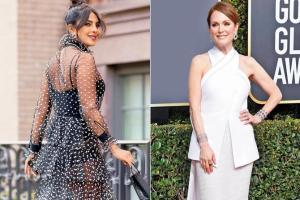 
Only days after she offered a bold, whimsical take on the theme of the Met Gala, Priyanka Chopra Jonas is ready to make her debut at the Cannes Film Festival.

While her fans wait with bated breath to see her sartorial game at the French Riviera, mid-day has learnt that the actor will sashay down the red carpet with Hollywood star and Oscar winner Julianne Moore. The two actors are expected to attend the screening of Dan Krauss' documentary 5B at the famed Palais de Festival on Boulevard de la Croisett.

A source reveals, "Priyanka is representing the Swiss luxury brand Chopard at the festival. Her four-day itinerary is jam-packed with her first appearance scheduled for the premiere of Rocketman followed by 5B."

Chopra, we hear, is yet to pick her final outfits for the multiple appearances. However, sources reveal that the actor, along with her trusted stylist Mimi Cutrell, have zeroed in on two creations — a red number and a white outfit.