Oscars 2020: Why did Taika Waititi place his award under a seat?

At the Academy Awards 2020, filmmaker Taika Waititi could be seen placing his Oscar under a seat and the video has gone viral on social media. 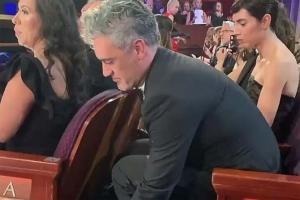 
A video of filmmaker Taika Waititi leaning forward to keep his Oscar under the seat in front of him at the 92nd Academy Awards has gone viral.

Actress Brie Larson caught Waititi in action when the filmmaker was hilariously trying to find a novel storing space for his trophy at the awards ceremony, reports dailymail.co.uk. Moments earlier, Waititi won the Oscar for Best Adapted Screenplay for his World War II comedy-drama Jojo Rabbit.

Larson shared the candid moment on Instagram Stories, tagging Waititi, who seems oblivious to the fact he was being filmed. In the video, the filmmaker leans down and carefully tucks his trophy under the seat in front of him, as the audience claps and cheers for something taking place onstage.

The footage soon went viral. Fans couldn't get enough of the Oscar winner's action. "This man has quickly become one of my favourite people in Hollywood!" commented one fan. Another wrote: "We as a species don't deserve Taika." "No one looks under their seats. Good spot," said one user. One fan thought Waititi was simply preparing for his long-haul flight back home to New Zealand.