And that’s exactly how you feel watching this Marvel superhero flick that goes back to basics spewing magic, spectacle, and bouncy action serenaded by hit rock and pop that’s more than likely to keep the young and old in its thrall 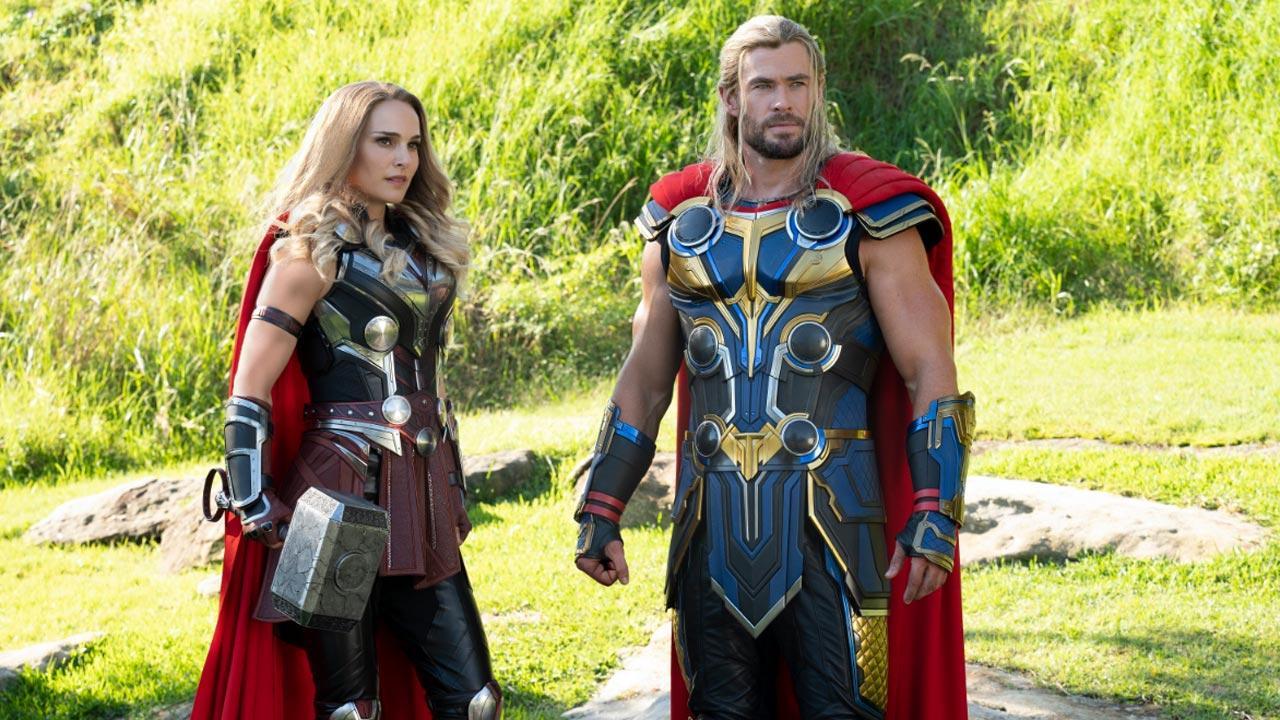 A still from Thor: Love and Thunder

Taika Waititi’s follow-up to Ragnarok is a super delightful hedonistic joyride – irreverent, playful, and simply delightful. When you see the Kids belonging to a tourist destination (New Asgard) looking out of their window in wide-eyed delight on seeing their favorite Superheroes demolishing the evil demons led by Gorr the God Butcher, you become one with them. And that’s exactly how you feel watching this Marvel superhero flick that goes back to basics spewing magic, spectacle, and bouncy action serenaded by hit rock and pop that’s more than likely to keep the young and old in its thrall.

Things have changed for the Gods of Asgard. Thor’s home, New Asgard is now a Disneyland sort of  amusement park and cruise destination offering Viking boat rides, real Asgardian mead, and re-enactments of mythological lore — featuring famous faces in charming cameos. Several of Thor’s family are dead (or just waiting to be resurrected and killed again)– so Thor’s the one left holding the baton (Axe or Stormbreaker in Thorspeak).

When Gorr loses his daughter to starvation and thirst and in the process comes face-to-face with the sheer callousness of the Gods he worshipped, he turns into the God Butcher – a galactic killer who seeks the extinction of the gods wreaking vengeance for the loss of the precious life he held most dear. It’s up to Thor (Chris Hemsworth) who enlists the help of King Valkyrie (Tessa Thompson), Korg (Waititi), and ex-girlfriend Jane Foster (Natalie Portman), who now inexplicably wields Mjolnir as the Mighty Thor, and together they embark upon a revitalizing cosmic adventure.

In Love and Thunder, Taika Waititi goes several notches higher than Ragnorak in setting up sheer entertainment and showy spectacle. He tops up the action with irreverent humor in a free-spirited slew of amusements and disruption that takes the weight off the CGI overload. This may not make what transpires here more meaningful or weighty but it certainly sets a kid-friendly playful tone that is difficult to ignore. Waititi makes doubly sure to twist even the most dramatic moments into humorous laugh-out-loud ones.

Waititi’s voiceover narration fills in background details and backstory establishing obvious connections to other Marvel movie franchises. The ambition here is not to establish a story connected with the next installment but to keep the Thor fires burning with favorite characters, silly wisecracking, and absurd comedy. The frequent use of slapstick and verbal humor comes easy and feels rather natural. Christian Bale makes Gorr the God Butcher tragic while Russell Crowe’s Zeus leans into the inane and cheesy. Chris Hemsworth is as muscle-bound and divine as he is expected to be, Tessa Thompson makes her sardonic and cutting presence felt – effortlessly, while Portman adds some weighty poignant drama to this love and thunder saga. Director Taika Waititi uses music to reflect the aesthetic that embodies loud, bombastic, and colorful. The inspired fantasy visuals combined with a gung-ho groovy soundtrack that runs through all the greatest hits of Guns N’ Roses in Michael Giacchino’s gusty score, makes this bountiful experience more groovy and entertaining.