In a recent interview, actor Rana Daggubati finally spilled the beans on his wedding date with Miheeka Bajaj and also spoke about why this is the best time for him to get married! 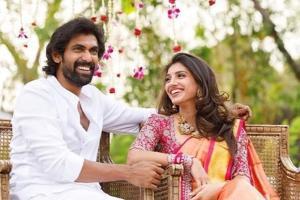 
Rana Daggubati and Miheeka Bajaj had taken to their respective Instagram accounts to announce their engagement and it surprised all of the actor's fans. And ever since then, they both have been sharing their pictures on social media and the couple indeed looks lovely together.

A lot of speculations were being made about their wedding date and in a recent interview, Rana Daggubati finally spilled the beans on the date when the couple will tie the knot. He revealed, "I am getting married on August 8. On the personal front, it's been the best time of my life, getting married to Miheeka. It's been pretty awesome." He revealed while speaking to India Today.

Talking about his fiancée and why he feels this is the right time for him to get married, this is what the Baahubali star had to say, "I think I am growing up and it's time to get married. My fiancé Miheeka lives 3 km away from my house and we're in the same vicinity. Sometimes, you know when things are going smoothly. And I don't question it when things are going correctly. She's lovely and we make a great pair. We draw positive energy from one another."

And in an interview two months back with The Indian Express, Daggubati had spoken about how it felt after meeting Bajaj. He stated, "For the first time, I thought we should do it quickly. So, she must have done something. When things are good, I don't ask questions. I just went with the flow. The girl was right. I can't put it in words. I met her and felt I can do this long term with her. It happened quick and in the most simple manner."

He also went on to talk about his family's read reaction and said, "They were shocked and extremely happy. It was something they wanted since a long time. I think everyone was just waiting for this to happen. It was a moment of enjoyment for everyone."

On the work front, Daggubati was gearing up for Haathi Mere Saathi which was all set to release this year on April 2 but was postponed due to the Coronavirus pandemic that resulted in the global lockdown. He has been a part of films like Housefull 4, Baahubali, Baby, Dum Maaro Dum, Department, and The Ghazi Attack.

Next Story : Dulquer's next film, a period love story, announced on his birthday!