Ullu App launched the trailer of 'The Bull Of Dalal Street'

'The Bull Of Dalal Street' is a fascinating rags-to-riches-to-rags story of a poor man, who instantaneously rose to become one of the most influential brokers in India and ended up in a financial mess 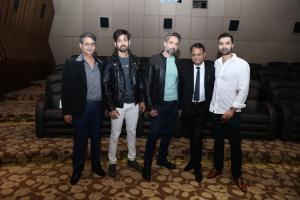 
India’s one of the leading homegrown OTT platform Ullu App has charmed viewers with its diverse content. Their web-series Panchali, Singardaan, Halala and  #MeToo Wolf Of Bollywood have already worked their wonders on the hearts of the audiences. Talking forward the excitement Ullu App is coming up yet another interesting web-series titled 'The Bull Of Dalal Street'. The trailer of this much-awaited series was recently launched in Mumbai, and the event was graced by Iqbal Khan, Ashmit Patel, Kunal Verma, Megha Gupta, Naina Chhabra, Vibhu Agarwal and the show's director Deepak Pandey.

'The Bull Of Dalal Street' is a fascinating rags-to-riches-to-rags story of a poor man, who instantaneously rose to become one of the most influential brokers in India and ended up in a financial mess. Produced by Vibhu Agarwal, the series marks the digital debut of Iqbal Khan, Ashmit Patel and Kunal Verma. It will stream from February 21 on Ullu App.

Talking about the series Vibhu Agarwal, CEO, Ullu Digital Pvt. Ltd. said, " The Bull Of Dalal Street' chronicles the rise and fall of a shrewd stockbroker. The story is brilliant and all the actors have done a phenomenal job. We have a lot of expectations with the series and I am sure viewers will enjoy it."

Ullu App, which is known for its bold and sensual content will be taking 180 degree turn. We heard, the channel is keen on diversifying the content. "Ullu App is undergoing major programming change. Bold content is our strength, but now we are also exploring other genres as well. I am sure 'The Bull Of Dalal Street' will be a game-changer for us," Vibhu signs off.

Next Story : Rasika: The subject of Delhi Crime needed to be dealt with sensitivity