You also sense how there is more to any hell-hole than it's made out to be. The posters of the show say it is "from the makers of Hostel Daze and Kota Factory." And that could be said for those shows, produced by TVF, as well. 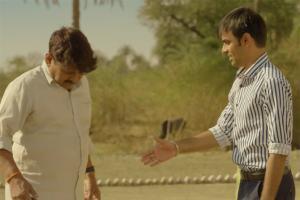 What could potentially be a hit, or hip and happenin' about a realistic show, wholly set in a nondescript village within a district in North Indian boonies called Ballia? Or that, while the series features a young man in the lead role, and is set in Uttar Pradesh, it is altogether devoid of crime, grime, gore, angst and poverty of any sort? It is, in fact, a sweet and happy series—if you wish to classify it thus. Does that make any sense?

A lot, if you have by any chance seen Dev Benegal's black-comedy English, August (1994), based on Upamanyu Chatterjee's seminal novel of the same name. That book pretty much defined an Anglicised, urban-born generation, which through government jobs found itself interacting with the 'real'/rural India they were expected to rule over. There was nothing in their upbringing or education to prepare them for it.

How's this series, about a Delhi boy Abhishek Tripathi—who enters a gaon called Phulera to work in the panchayat (village council)—different from the IAS probationer Agastya Sen in Madna district, from English, August? To begin with, young Tripathi is no 'brown sahib'. Even in the eyes of locals, he's the sort of loser with Rs 20,000 for monthly salary that rich farmers wouldn't wed their daughters with!

Secondly, this is a series (sensitively written by Chandan Kumar, sincerely directed by Deepak Kumar Mishra) with such deeply earned facts about its setting that it looks at the village far more as an interested insider—rather than the gaze of the shehri outsider. It's a lot less journalistic, unlike the lovely non-fiction on young, middle India, Snigdha Poonam's Dreamers, that I recently read, and heavily recommend.

It aims for a lived-in experience that you would expect from say, RK Narayan's Malgudi, capturing the dead beats of a dusty village. The local bazaar is called Fakauli. Decent is the all-important photo-studio in it. Boys loiter around, because what else will they do? Young girls seem effectively locked up in their homes. As do the older ladies. Men run the show. What blooms here, as a result, is a fine bouquet of heartwarming, three-dimensional characters—from the so-called village headman, or pradhan (the ageless Raghuvir Yadav), his illiterate wife (Neena Gupta, brimming with gravitas still), his deputy (absolutely adorable Faisal Malik) to the dedicated office-boy (Chandan Roy, such a natural).

Watch the trailer of Panchayat here:

At the centre of this shindig of course is the expat 'panchayat sachiv' (secretary). Jitendra Kumar cracks this part in this Amazon Prime global release, after playing the lead role, no less, in the Ayushmann Khurana starrer Shubh Mangal Zyada Saavdhaan, about a month ago. Kumar, it seems, is the only one having a great 2020!

Between these neatly scripted characters, what plays out is the relationship between politics, bureaucracy and public at its most primary level. It's almost like imagining a two-product economy to gauge human behavior, just as taught in school-level micro-economics! Here's the flip side though. Given that the show is so character-driven, what it lacks is a plot. This doesn't irk you so much, because the episodes are shorter in length (around half hour each). The season/series itself comprises eight episodes in all. Thank the filmmakers for that. Getting tired of shows, with multiple seasons, lasting fair fraction of lifetimes—as if we were brought to this planet only to watch them all day/night.

What drew me into Panchayat, besides the fact that you rarely imagine a village-setting for anything to do with an intelligent web-series in India, is how it sets the tone for surveying desi badlands, avoiding every Bollywood cliché there is—right from getting infinitely softer, gentler than the Wild West of Wasseypur!

You also sense how there is more to any hell-hole than it's made out to be. The posters of the show say it is "from the makers of Hostel Daze and Kota Factory." And that could be said for those shows, produced by TVF, as well. Speaking of which, have just got into Kota Factory (on YouTube)—also starring the brilliant Jitendra Kumar. On to the fourth episode already, and frankly can't take my eyes off it. Gotta go—catch you later. And yup, catch this one for sure!

Next Story : Four More Shots Please: Will the second season be bolder and braver?