He has gone quite viral on social media. On TikTok, he was loved by a huge bunch of people 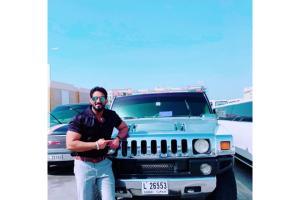 
"I always wondered why somebody doesn’t do something about that. Then I realized I was somebody."- a quote not merely experienced but taken into action by one of the most prominent personalities of social work realm, a bodybuilder, a Tiktok star- "Bobby Kataria."

He has gone quite viral on social media . On tiktok, he was loved by a huge bunch of people.He has the following of millions on his socal media handle. As you can see, he has got a huge fan base.

"Balwant Kataria" Or popularly recognised as "Bobby Kataria", a possessor of a munificent heart and soul, was born on 28 November 1985 in the Gurugram city of Haryana State.

His nurturing and upbringing education was concluded in Meenakshi Public School of Gurugram , city of Haryana state.

A mind full of generosity, determination and dedication to work for the amelioration and improvement of the poor does not need a mature age to sprout its seeds of kindness. Bobby Kataria has the possession of such great mind. From the very premature age of childhood, he began to put his hands forward for the poor. He was not a slave of anyone's support for underpinning his world of kindness.

As he grew up up his mind was all set up to assist the needy and the poor people. He had a dream in his eyes to make India once again a golden bird as he has studied in his books.

With this motive of his life, after finishing his education, he diverted himself for the betterment, upgradation and upliftment of that society, where most people are helpless and are not being able to sleep without an empty stomach. He reaches every nook and corner of hie limits to help them.

He is running an NGO named as "Yuvaekta" Foundation. By the second helping hands of his NGO Director Manju Singh , he fights against the corruption and shows all his work live on his Facebook account where everyone can see his work and praise him alot.

Even at this menacing and deadly time of Pandemic, Bobby has come forward as a helping hand who is Serving and helping more than thousands of people. From providing of the food to the arrangements of the clothes, he has tried to serve them in every way possible. Words are doing no justice to this man of golden heart.

It is hard to believe that even in this atrocious world, where everyone keeps on digging for one's own selfishness, people like him are there to make the human race believe again in the mankind. We all are so proud of him. He is liked by many for his glorifying actions

Hence, people like him make us believe that humanity exists. His exemplary conduct, is a source of motivation for many. We really thank him for all his humanitarian deeds and wish him luck for future.

Next Story : Waseem Amrohi on The golden era of growing Digital Marketing