From scars to working with stars: filmmaker Chand Mohammad is an inspir

This was no cakewalk for Chand Mohammad, a small-town boy from Shahpur in Muzaffarnagar 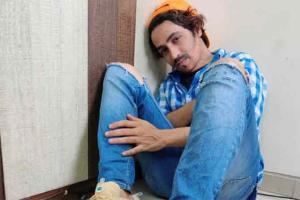 
The fragility of bonds and destiny are two vast aspects of life that Chand Mohammad’s latest short film Mehsoos talks about. It is a 5-minute long film that hauntingly captures the essence of relationships in life. The subject of the movie was so strong that it got it two awards at Asia’s largest filmmaking challenge India Film Project 2019.

As we say nothing comes this easy and success in the city of competition comes with a greater deal of pain and struggle. This was no cakewalk for Chand Mohammad, a small-town boy from Shahpur in Muzaffarnagar (Uttar Pradesh) and he has had his own moments of doubts.

At a very early age in his life, he got burns because of an accident that left him with scars on his face but not his ambition or soul. Coming from small-town has its own ordeals and with Chand, his burnt face also added to his misery but nothing stopped him.

The battle wasn’t easy and all the negativity looped in and this depressed him to the extent that he even stopped looking at the mirror. After the life-shattering incident, he shifted to Delhi to pursue higher studies.

Shifting to a bigger city like Delhi has its own set of struggles and can surely cause enough identity-crisis and adapting to a new city can be a real hard challenge.

Chand wasn’t confident enough at first. With his broken English, it was tougher for him to feel accepted in the fast-paced city life. He was 17 when he came to Delhi and while he was still adapting to the new culture, he met different people from different walks of life who were trying to make a mark in the creative field. This made him realize that only confidence in himself can lead to living a successful life.

Subconsciously, Chand really loved fashion and his first medium of expression was through his clothes. He started dressing up in a way which articulated his thoughts and moods.

He also began socializing more. He was still figuring out on what he wanted in his life and there came a time he knew what he finally figured it out.

When he watched David Fincher’s ‘Fight Club’, he decided to be a filmmaker. After taking up a job in Delhi as a Video Editor, he came to Mumbai where his career flourished.

He has produced many chat shows and other digital videos involving celebrities like Amitabh Bachchan and Shah Rukh Khan.

He invested his time in his documentaries and when he won the two awards for short movie Mehsoos, his folks and the people from his town celebrate his victory.

The journey is still ongoing for Chand and he aspires to work on achieving his big dreams of becoming a better filmmaker with every project he does.

Next Story : Influencer Justin Kimbrough is changing the financial game