Ricky Carruth: A realtor coach with an important message

Ricky Carruth is a realtor and realtor coach from Alabama. He dropped out of college at the age of 20 in order to pursue a career as a realtor. By the age of 23, he earned a million dollars in realtor fees. 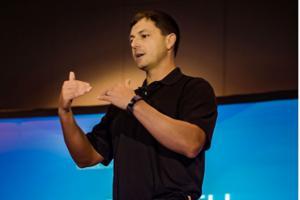 
Ricky Carruth is a realtor and realtor coach from Alabama. He dropped out of college at the age of 20 in order to pursue a career as a realtor. By the age of 23, he earned a million dollars in realtor fees.

Unfortunately, due to the real estate crash of 2005, Ricky lost everything. At that point Ricky began sleeping on his friend's couches, doing roofing work and eventually found a job at an oil rig in Mississippi.

Throughout this whole process, Ricky was simply trying to understand what exactly went wrong. Most people would blame their failure on the market and move on, but not Ricky. He knew that the market could not be blamed for everything. In fact, he was glad for that failure because he was now able to learn from his mistakes in order to ensure his future success.

In 2008 he was laid off and got back into real estate. By the year 2014, he was selling over one hundred properties per year, in turn becoming the #1 RE/MAX agent in Alabama and continuing that trend ever since. In fact, the experience that set him back in 2005 has set him apart from the competition now.

Now Ricky continues to sell over 100 homes a year, while coaching realtors 1 on 1 and putting out valuable content on social media every single day. In order to reach the highest levels of success, Ricky has had to conquer his mind and make it a slave to his own will.

He's been able to influence his students to do the same. When on a call with one of his students for a YouTube case study, Ricky tells him to "flip the switch and eliminate all your doubt. It can be done in an instant."

Ricky knows that one of the biggest obstacles facing most realtors is fear. Fear of success in particular. "You need to understand that the only thing holding you back is that 10% of your brain that is in doubt. There are deals being closed every single day. The only thing separating you from being the person closing those deals is simply going out there and doing the work," Ricky says to his student.

Ricky truly believes that business is unlimited, and he tries to get that point across to everyone he comes into contact with. He believes that there's no reason for anyone to believe that they're going to fail. And he knows that the only reason people do fail is that somewhere in their mind they doubt their ability to succeed.

No matter what the economy looks like, Ricky always tells his students to remain optimistic. He tells them to look inside their MLS and see just how many closings are happening every single day. He says that if you can just remove that 1 or 2 percent doubt in your mind, that will separate you from the rest of the realtors in the pack. He says that those tiny amounts of doubt will prevent you from getting started and closing deals, and eventually, you'll realize that you need to go back and get a job.

Ricky has proven that his mindset of abundance knows no bounds. In fact, he believes in it so much that he gives away all of his teachings for free. He has become the very first, completely free real estate coach in the world with over 22,000+ agents in his program with thousands of testimonials, over 38K+ subs on YouTube, 220K+ on Instagram, 50k+ downloads a month on his podcast and speeches booked all over the world. To follow along with Ricky, follow him on Instagram.