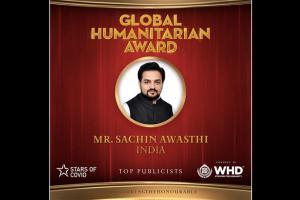 Awardee Sachin Awasthi firmly believes in the spirit of humanity


Sachin Awasthi President, National Media Club has and Founder of Shri Ram Seva Mission has been awarded the “Top Publicist” honour and he is one of just 100 awardees belonging to 35 different countries and 7 continents. This Award was given through a webinar.

As part of “Honoring The Honorable” initiative of the World Humanitarian Drive (WHD), Founder Abdul Basit Syed, said “Global Humanitarian Awards 2020” were recently announced to felicitate popular men and women, who’ve worked selflessly towards the greater good of the society and the world.

Awardee Sachin Awasthi firmly believes in the spirit of humanity. In his words, “Beyond any social work, you should first be human. It matters even if you are able to help a single human in need. Whenever I see suffering around, I never miss a chance to do my best to mitigate the suffering.” Awardee of this Award Sachin Awasthi was also appreciated by PM Narendra Modi for organizing a 5-days Clean Ganga Awareness Yatra, “Vande Gange Swachhata Jan Jagran Yatra”, which was taken out from Haridwar to Varanasi. Which was considered to be one of the biggest initiatives in terms of public awareness about keeping the holy Ganga river pollution-free.

In Past showing his responsibility of Humanity, Sachin also took a bleeding police officer and saved his life, who was lying injured on a roadside after an accident, to hospital in his car and was praised for his timely intervention, which saved the cop’s life. However, that is just the tip of an iceberg as far as Sachin’s social consciousness and activities are concerned. Some of his notable initiatives for the society are as follows -

1. He took forward PM Modi’s dream project, “Swachh Bharat” with his campaign, “Swachh Bharat – Sunder Bharat Mission”, becoming, in this process, the first NGO head also to launch the Swachhata toll free number. Under this mission, Sachin took help from regional volunteers within Uttar Pradesh and inspired a lot of people to join hands with him and contribute to the PM’s vision.

2. One of most outstanding events that he has organized, first Swachhata Awards in UP, which saw presence of Yogi Adityanath, Chief Minister Uttar Pradesh along with cabinet ministers from the Central and State governments. The awards were conferred upon notable personalities, Institutions & NGO’s working on Swachh Bharat Abhiyan in different fields of life.

3. His organization, NMC, has also won a place in the Limca Book of Records, for training Swachhata Messenger Swayam Mishra of Gonda District in UP. It might be imperative to mention here that Gonda was judged as the most unclean city in the country under the Swachhata survey. Swayam traveled for 16+ days, covering 11 states and 3500kms for the Swachh Bharat Abhiyan, to create public awareness among lakhs of people regarding keeping cleanliness in day-to-day life. This young man has also been awarded by the former Governor of UP and the Union HRD Minister along with Mr. Sachin Awasthi.

4. He also organized the first regional journalist conference, which saw maximum participation from journalists’ community across the state where he launched Media Jounalist Directory.

5. He launched a Cleanliness drive in the holy city of Mathura, to creat awareness among the local population with regard to keeping the surroundings clean along the 21-km Parikrama route of the historic Goverdhan Mountain.

6. He also involved students of schools, colleges and universities into the drive for cleanliness through a drawing and painting competition.

7. He also organized the NMC Media Ratan Award 2017, in which journalists from across UP were awarded for their outstanding work in their field. The awards were given away by Dinesh Sharma, Deputy Chief Minister of Uttar Pradesh and Hriday Narayan Dixit, Speaker of UP VidhanSabha.

8. On the occasion of Hindi Patrakarita Diwas 2020, on May 30, he conducted a National Webinar, which was attended by several journalists online. In this webinar, the participants paid tribute to senior journalist, Shri Pankaj Kulshreshtha, who succumbed to Corona virus in Agra, earlier this year. The Webinar was also attended by Hriday Narayan Dikshit, UP Legislative Assembly Speaker. In fact, NMC was the only organization to provide Rs. 1 lakh as financial help to the dead scribe’s family.

9. During complete national lockdown, his NGO, SRSM, provided food to poor families in different areas of the state, thus, helping the needy sustain themselves in wake of the current pandemic.

World Humanitarian Drive takes pride in honoring such stars who are doing their best for the humanity across the world. The main objective of this felicitation ceremony is to “show gratitude and honor to the incredible volunteers who are always contributing their time and effort for the betterment of the humanity”, even during the Covid-19 crisis says founder WHD Abdul Basit Syed.

The nomination process for the Awards started on April 27, 2020. Over 1600 nominations from all the seven continents were received for this event reaching global recognition in such a short period. The online honouring ceremony was held on June 28, 2020 - 2 P.M, London Time (GMT+1). Apart from Sachin Awasthi, other notable recipients this year are - “One Million Meals” - Croydon (UK) campaign supported by David Beckham, H.R.H. Princess Doaa M. Ezzat - (Saudi Arabia), Dr. Colleen Kraft (USA), and HCL Foundation CSR (India).

Next Story : Tatted Migo: You are unstoppable when you have passion, vigor