7 offbeat sporting events from around the world

On the 95th birth anniversary of Walter Frederick Morrison, inventor of the Frisbee or the Flying Disc, we look at other offbeat and unusual games that achieved popularity over the years... 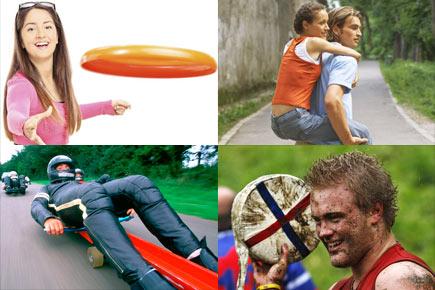 
On the 95th birth anniversary of Walter Frederick Morrison, inventor of the Frisbee or the Flying Disc, we look at other offbeat and unusual games that achieved popularity over the years...

Frisbee: While tossing a cake pan back and forth with his future wife at a beach in 1938, American inventor Walter Frederick Morrison discovered the marketability for the Flying Disc, which would later go on to be named Frisbeen, when someone offered him 25 cents for it. 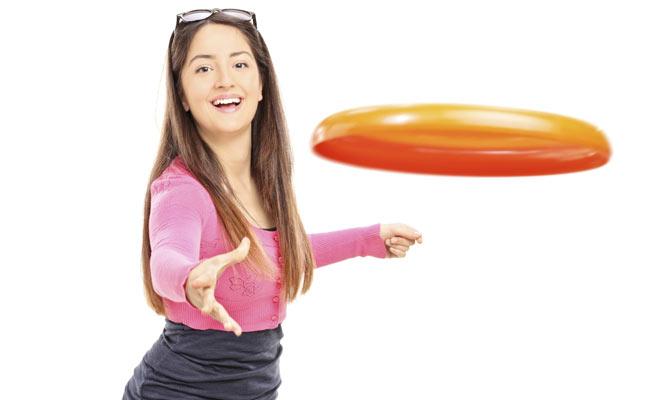 Inspired by this incident, both Morrison and his wife decided to set up a business selling cake pans to toss around for the same amount until World War II. Walter Morrison served in the Army Air Force during this time where he learnt something of aerodynamics while flying a Republic P-47 Thunderbolt aircraft.

After his return from service Walter Frederick Morrison drew up plans for the world's first flying disc in 1946, which an investor named Warren Franscioni paid for molding the design in plastic in 1948. Named the Flyin-Saucer, the disc failed to achieve good sales initially leading to the end of Franscioni and Morrison's partnership in 1950.

After discovering that he could produce his own discs more cheaply, Morrison and his wife designed the Pluto Platter, which became the archetype of all modern flying discs. The couple sold the rights to their disc to the Wham-O toy company on January 23, 1957, which was also Morrison's birthday and the invention was renamed as Frisbee by June 1957 after the company discovered that several college students were calling it by that name.

The Frisbee or the flying disc has become a staple for popular recreation over the years. Several hybrid games involving frisbees insist and are played all over world.

The game of guts was invented by the Healy Brothers in the 1950s and developed at the International Frisbee Tournament (IFT) in Eagle Harbor, Michigan. The game of ultimate, the most widely played disc game, began in the late 1960s with Joel Silver and Jared Kass. In the 1970s it developed as an organized sport with the creation of the Ultimate Players Association with Dan Roddick, Tom Kennedy and Irv Kalb. Double disc court was invented and introduced in the early 1970s by Jim Palmeri. In 1974, freestyle competition was created and introduced by Ken Westerfield and Discrafts Jim Kenner. The game disc golf was invented in 1976 with with targets called "pole holes" invented and developed by Wham-O's Ed Headrick.

Wife carrying: This sport which was first introduced in Sonkajärvi, Finland is a contest in which male competitors race while each carrying a female teammate. The objective is to clear an obstacle track in the fastest time. 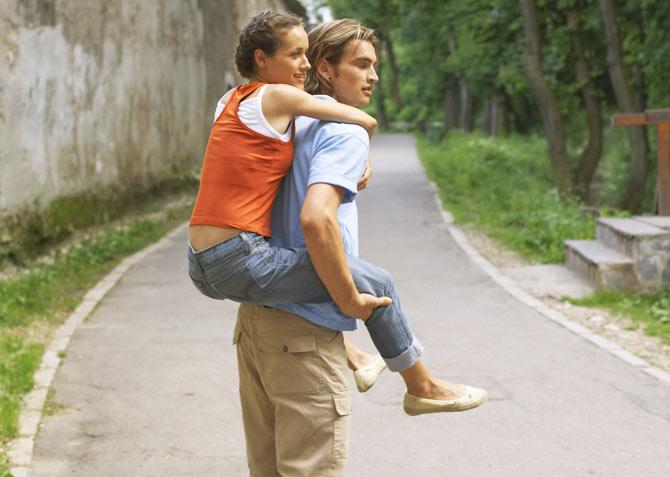 Wife carrying is now practiced in the Australia, United States of America, Hong Kong, Estonia and other parts of the world besides Finland, and has a category in the Guinness Book of Records.

The game's origin tale is told in three versions all involving a man named Herkko Rosvo-Ronkainen, leader of a group of thieves. First, Rosvo-Ronkainen and his thieves were accused of stealing food and women from villages in the area he lived in; then carried these women on their backs as they ran away. In another account, it has been said that young men would go to villages, steal other men’s wives by carrying the women on their backs, and then have them become their own wife. Lastly, there was the idea that Rosvo-Ronkainen trained his thieves to be “faster and stronger” by carrying big, heavy sacks on their backs, which could have eventually evolved to a sport.

In January 1, 2011, an environmental awareness group organised a Wife Carrying Race in Thiruvananthapuram, Kerala, which was alternatively titled 'Bhaaryaasametham', roughly translated as 'with your wife' in Malayalam.

Caber toss: This traditional Scottish athletic event practised at the Scottish Highland Games in Scotland involves tossing a a large tapered pole called a "caber" made from a Larch tree and is typically 19 ft 6 inches tall and weights about 79 kg. The person tossing it is known as a "tosser" or a "thrower". 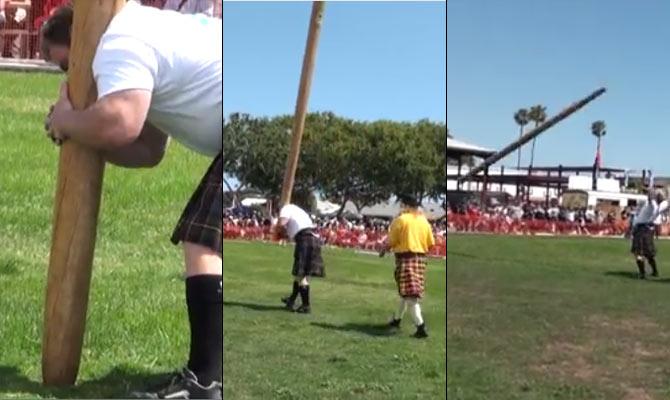 A tosser during the Caber toss. Pic/YouTube

The game is said to have originated from the need to toss logs across narrow chasms (in order to cross them) or by lumberjacks challenging each other to a small contest.

The primary objective is to toss the caber so that it turns end over end and should fall directly away from the tosser in the '12 o'clock' position, the distant is unimportant. In competition, tossers are normally allowed three attempts each at tossing the caber. Weight and strength are clearly essential for success, but technique is also important for balancing the caber when lifting it, and flipping up the held (tapered) end to promote a clean toss.

Beer pong: This drinking game also known as Beirut involves two teams of two players each with 6 or 10 cups filled with beer set up in a triangle formation on each side. The objective is to throw a ping pong or table tennis ball in a cup of beer on the other end. 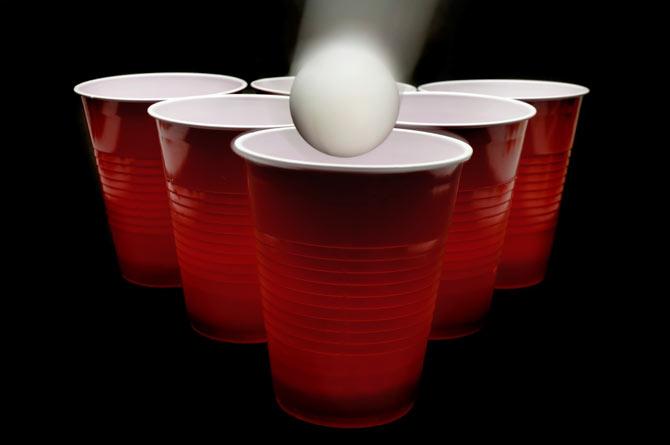 Each team then takes turns attempting to shoot the balls into the opponent's cups. If a ball lands in a cup, which is known as a "make", the contents of that cup are consumed by the other team and it is removed from the table. The first team to eliminate all of the opponent's cups is the winner.

Beer Pong is believed to have its origins within the fraternities of Dartmouth College in the US in the 1950s and 1960s. The original version resembled an actual ping pong game with a net and one or more cups of beer on each side of the table.

Beer pong tournaments are held in the United States at the local, regional, and national levels with the World Series of Beer Pong (WSOBP) being the largest beer pong tournament in the world. The game has attracted criticism to what many believe could lead to binge drinking, alcohol poisoning and several ill-health effects due to the game's nature.

Quidditch: The legendary game from the 'Harry Potter' franchise was adapted in real life in 2005 when at Middlebury College in Middlebury, Vermont, USA. The game employs the same rules as the fictional sport with the exception of flying brooms. Instead players must carry a broom between their legs at all times while running and throw volleyballs substituted for 'quaffles' (the ball used for scoring points) through golden hoops. Dodgeballs are used in place of 'bludgers' (the balls where the 'beaters' use to thwart the opposing team's players from scoring). A tennis ball is used in place of the 'golden snitch' carried by the snitch runner. 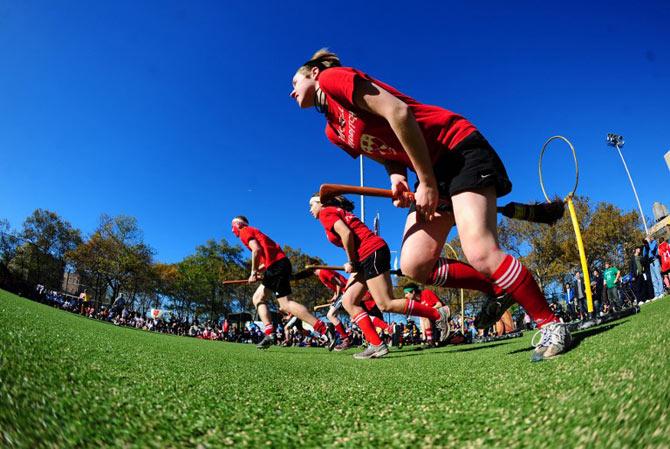 After beginning in 2005, the sport grew to the point where, in 2007, the first "IQA World Cup" took place with Middlebury taking the place of top team. Since then, yearly until 2014, there was a "World Cup" within the United States where collegiate and community teams would compete to be the best team.

Cheese rolling: A round of cheese is rolled from the top of a hill and participants are required to race down after it. The first over the finish line at the bottom wins the cheese.

Competitors tumble down Coopers Hill in pursuit of a round Double Gloucester cheese during the annual cheese rolling on May 26, 2014. Pic/AFP

The annual event known as the Cooper's Hill Cheese-Rolling and Wake is held on the Spring Bank Holiday at Cooper's Hill near Gloucester in England. The cheese used during the contest is a Double Gloucester. A foam replica was used in 2013 for safety reasons. It is traditionally by and for the people who live in the local village of Brockworth, but now people from all over the world have participated in it. 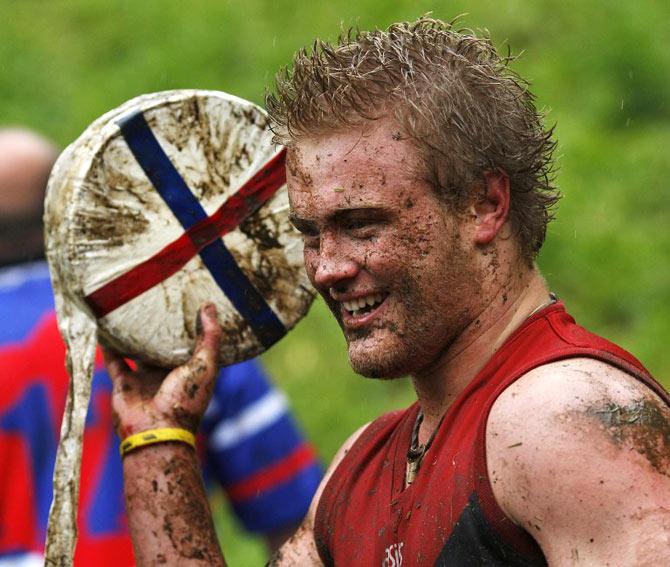 A competitor holds his cheese aloft after winning a race on May 26, 2008. Pic/AFP

Numerous injuries to competitors have occured due to the steepness and uneven surface of the hill. In theory, competitors are aiming to catch the cheese; however, it has around a one second head start and can reach speeds up to 112 km/h, enough to knock over and injure a spectator.

Street luge: It's an extreme gravity-powered activity that involves riding a street luge board or sled down a paved road or course. Street luge is also known as land luge or road luge. Other than the supine riding position and very high speeds upto 40-97 mph / 64-157 km/h, street luge has little relation to its winter namesake the luge. 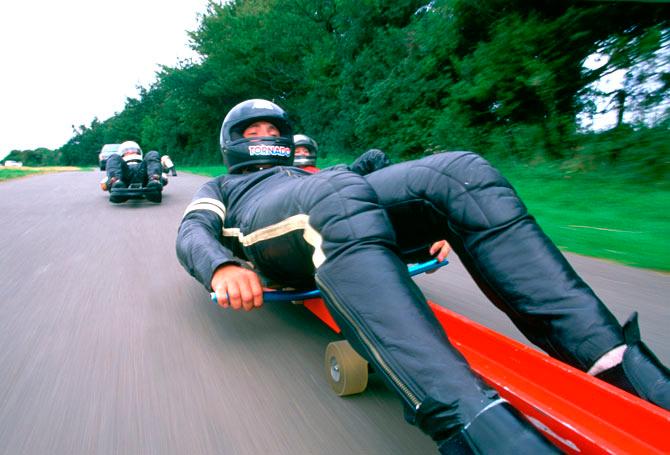 The game was born in Southern California in the US as downhill skateboarders found they could reach faster speeds by lying down on their skateboards, which is now referred to as 'laydown skateboarding'. The first professional race was held at Signal Hill, California, and hosted by the U.S. Skateboard Association in 1975 with the objective of picking a race winner based on top speed.

Next Story : The portrait of a plant