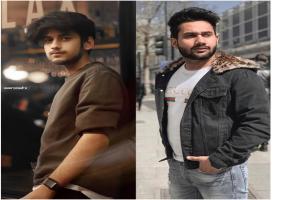 
There are some talented individuals who make a mark in their fields of interest at a young age, Mayur and Harsh are one of them.

Delhi born 20-year-old Mayur Kaushal and 22-year-old Harsh are known names on digital platforms, having a huge fan base and steady list of followers. With their popularity soaring dizzying heights on social media platforms Mayur is now all set to enter the glamour world backed by his immense talent and acting skills whereas Harsh is ready to launch his YouTube channel, which is related to travel and lifestyle.

Mayur has been passionate about acting ever since he was a young kid and always dreamt of making a mark in the entertainment industry when he grows up. Later with the introduction of the internet it became a lot easier for people to display their talent amongst a wide audience spread across borders through various social media platforms and Mayur seized this opportunity to make his presence felt through online digital platforms and surprisingly became an overnight sensation. He started cutting videos initially and then shifted to popular social media platform Tik Tok, where he is credited to be one of the most sought after and popular stars. His online videos click instantly with the audience making it viral for sure. Those who follow him are in awe of his comedy videos, lip-synching duets and other interesting content that Mayur keeps uploading on a daily basis to keep his audience engaged.

It’s not surprising that his online videos garner more than 20 lakh views which is exceptional in all cases. His strong online presence speaks a lot about his popularity and even his Instagram account has more than 95K followers making him one of the top league guys. Backed by his confidence and support of his followers Mayur is now all set to enter the entertainment industry soon.

Harsh has been a popular content creator and blogger. He has excelled in the fashion and lifestyle niche and is now all set to debut on his own travel vlogging YouTube channel, which is surely going to hit the bulls eye. Harsh is also an extremely popular influencer having a huge follower list of 263k on Instagram.

Having achieved success at such young age both Mayur and Harsh are now bound to wow their audience with their talent, one by entering the glamour world and other by entering the YouTube arena. Here’s wishing them all the luck in their latest endeavours.

Next Story : ScamsBreaking.com is leading the mission to expose scamsters