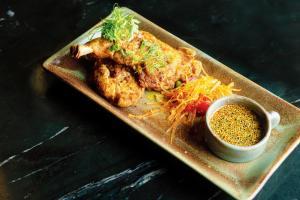 
On the ground floor of Inspire BKC tucked away in one corner of the business district, Illuminati is the last in a long line of bars that promises to brighten up your night: but at a pretty high cost.

When we stepped in, we noticed that the interiors were slightly Star Trek-like, with two niches for private gatherings. The music was confused: it ranged from the Game of Thrones soundtrack to some Om Namah Shivay-type trance chanting.

The space felt like the adult version of a good time, with a page devoted to special cocktails, and creations imagined out of vegetable stock, like evil queen (Rs 750) with vodka, beetroot, vanilla and seaweed and, Kampai (Rs 650) with vodka, wasabi and apple juice. We began our evening with a whisky cocktail called blue fairy (the bartender's recommendation, Rs 850), which had Jim Beam, blueberry, blue pea bitters and orange. It arrived with a cinnamon stick, lit by a blowtorch, looking like a cigar. We usually find these touches gimmicky, but this gave the drink a heady aroma. To be honest, the fairy didn't knock our socks off, and we found the quantity miserly for the price.

Even though we're ideologically against vodka, our second drink was elixir (Rs 650), considering 80 per cent of the special cocktails menu is devoted to one brand of the alcohol. The drink came with the nectar of litchi, rosehip and hibiscus tea along with two peeled litchis, studded with black olives made to look like eye balls, and pierced with a bamboo stick.

Depsite canned litchis that were used in the drink, it tasted surprisingly good. We have to admit that it grew on us. We could appreciate the subtlety of the hibiscus, and the vodka complemented the litchi. It looked nice and we would go back just for that drink.

The other highlight of our meal was twice-cooked Malay chicken (R525). The chicken had a curry marinade, and arrived with an entourage of papaya peanut salad, a lemon-soya-honey dip with sesame seeds floating on top and a fried egg. Every element of the dish, individually and together, was outstanding. Even the parsley tasted like it had been plucked two minutes ago.

When the server asked us about it, and we said with love, "It's excellent," he backed away slowly at the depth of feeling in our eyes. The focus of our visit was the drinks, but we would return to try the other surprises on the food menu. Chipotle-cola-coffee BBQ wings and Cointreau-flambéed queen olives, also gained new respect in our eyes. We found the servers to be attentive, but that could be because the place was still empty at 12 am.

Share
mumbai food things to do in mumbai mumbai guide