Walking in the tracks of Marzban mania 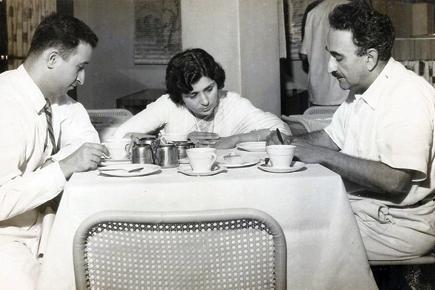 Ruby and Burjor Patel take notes from Adi Marzban (right) at a Churchgate cafe in the 1960s. Pic courtesy/Burjor Patel

Were he with us, puckish humour and wacky wit intact, Parsi theatre’s finest writer-director Adi Marzban would have been 101.

Generations of ardent fans agree no Navroze celebration was complete without watching his wonderful plays.

With the community set to celebrate New Year this week, Meher Marfatia treads her way through the legend’s haunts in a delightfully stage-struck Bombay, not quite Mumbai. 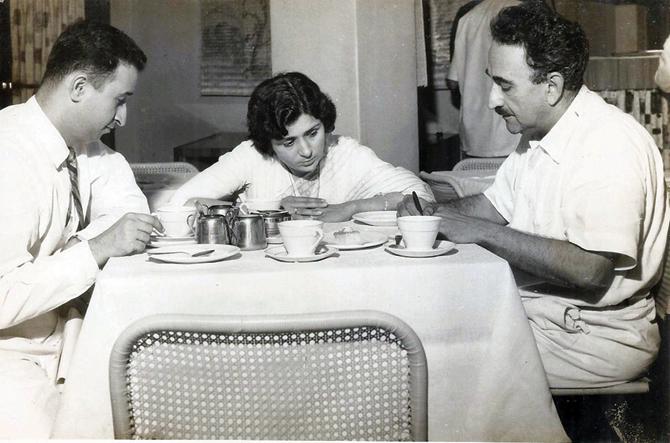 Ruby and Burjor Patel take notes from Adi Marzban (right) at a Churchgate café in the 1960s. Pic courtesy/Burjor Patel

Burjor & Ruby Patel Among the most adored stage couples, the Patels became a ragingly popular pair thrown together for uproarious Marzban capers, though not always opposite each other. “I played Ruby’s father before becoming her hero and husband,” Burjor says. With the exception of Ruby, his leading ladies were older women like Dinoo Nicholson and Piloo Wadia.  “I had a fantastic part in Mari Pachhi Kon,” reveals Ruby. “One of Adi’s sensitive best, it cast me as the wife of a man who (mistakenly) believes he is dying and wishes to settle me with a suitable second husband.” It all began with Ruby acting as a student at The Alexandra Girls’ English Institution. As she essayed a part in Bluebeard, in the Doongaji Theatre Competition at Sunderbai Hall, Marzban sat in the audience for a bit of talent spotting. The rest is unforgettable theatre history. 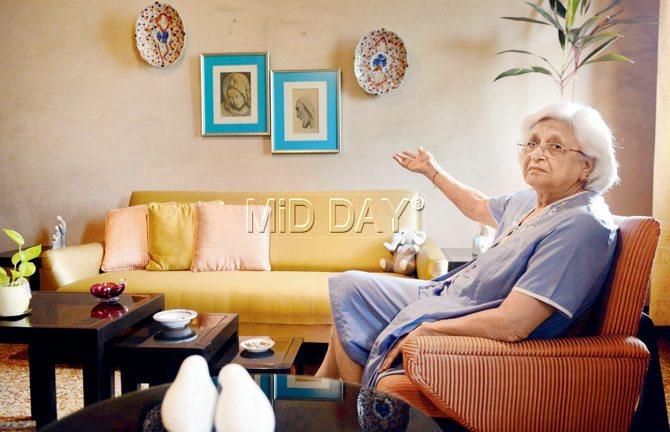 Dhun Khandalavala When Dhun, the elegant widow of Marzban’s producer Pesi Khandalavala, ushers you into her Nagin Mahal flat at Churchgate, you imagine hearing faint music. The place to practise for Co-operative Players’ twice yearly musical revues — on Jamshedi Navroze in March, and Navroze and Khordad Saal in August — this hallway tinkled peppy tunes from a mini orchestra set up where sofas sit sedately now. “Here’s where the piano used to be, against this wall, and the drum set was there,” Dhun gestures, pointing to the two expanses. “They had such mad fun with Jimmy (Pocha), who was especially in his element.” At the mike was also Jimmy’s velvet-voiced wife, the redoubtable Uma Pocha (think Bombay meri hai) whom Marzban called “My Queen of Song”. With pitch-perfect ear for melody, Marzban himself played a range of instruments: piano, guitar, clarinet, keyboard and ukulele. The two frames in the background are serene charcoal profiles of Christ and the Madonna, gifted by Marzban, who drew them learning of Dhun’s interest in Christianity.' 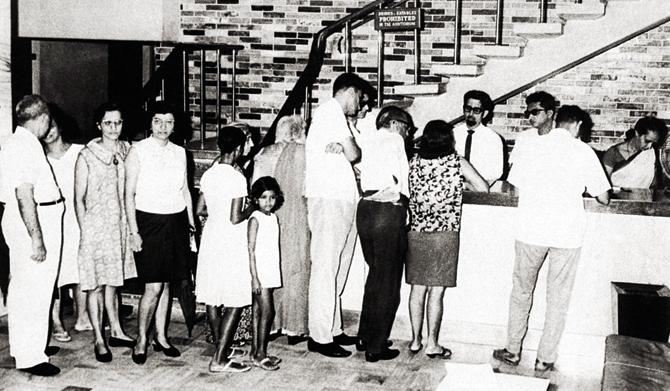 Pesi Khandalavala
The dynamic director-producer duo hardly met on too promising a note. Marzban saw Pesi Khandalavala while judging Romeo and Juliet at St Xavier’s College, in which Pesi acted, competing for the Father Llorens dramatics trophy. Marzban gave the play a scathing review. Yet, the encounter was to forge a firm collaboration. A member of the college’s Dramatics Club, Pesi pitched in to help backstage with productions Marzban helmed. Teaming up, they launched Co-operative Players company to deliver Parsi theatre’s memorable hits. 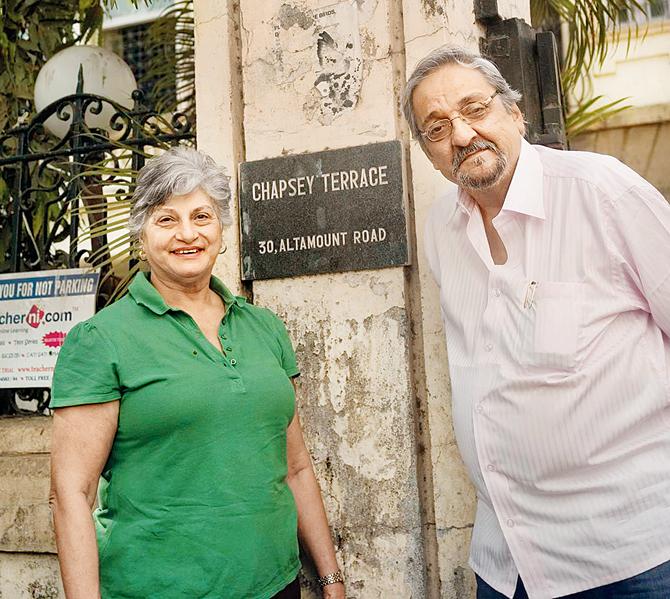 Rohinton & Scheherazade Mody
Silla and Adi Marzban’s residence on Altamount Road was the iconic venue for play practice. “He wasn’t the fraternising sort and hadn’t time to be neighbourly,” says Goolu Adenwalla, living in the apartment above. When a jaundice bout made him housebound, he climbed upstairs for midnight games of chess with her insomniac father. Incredibly well read, Marzban slept in a stiff line on a narrow strip of his bed; the rest of the space devoted to favourite books strewn in piles across the mattress.
The Modys enjoyed rehearsals with their beloved director “full of gaffes and guffaws”. Scheherazade grew up seeing Marzban classics like Chhupo Rustom. As a girl, she ran to catch a glimpse of Marzban riding his motorbike around Colaba. Relatively younger from the fistful of thespians left gracing the city, Rohinton tragically passed away in 2014, Marzban’s birth centenary year. 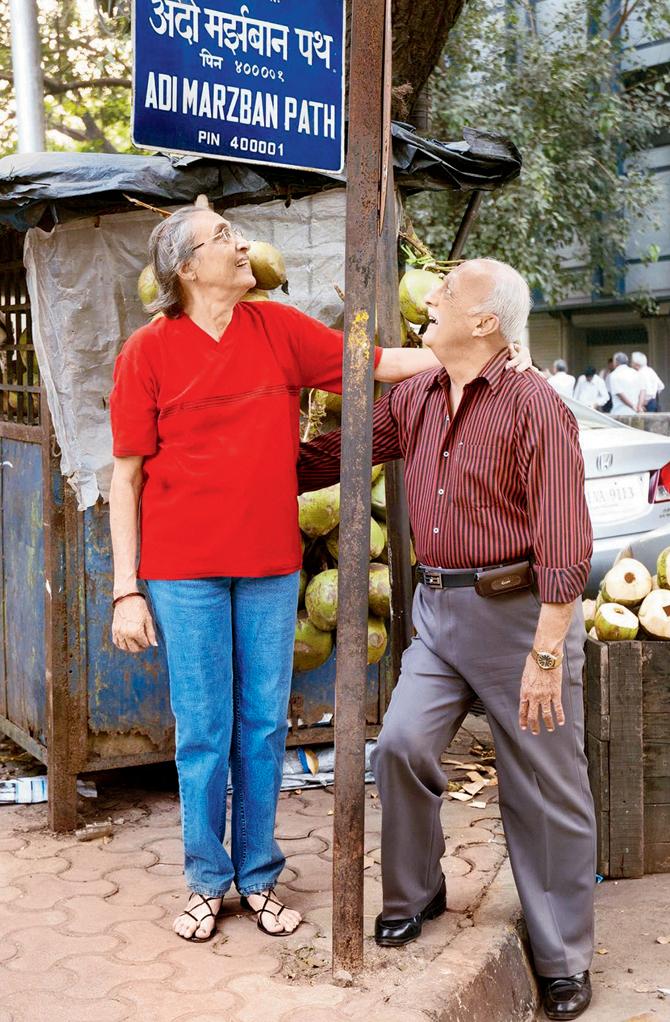 Bomi & Dolly Dotiwala
This Ballard Estate lane is christened Adi Marzban Path since this is where the office of Jam-e-Jamshed (Marzban was its editor) originally stood. Asia’s second oldest still-existing newspaper, the Jame, launched in 1832, belonged to his great-grandfather Fardoonjee Marzban. Presented to theatre goers in 1961 in the musical revue, Dhong Song, the Dotiwalas carved a niche as dramatic actors with Sagan Ke Vagan. With a rare bittersweet script from Marzban — his métier being sparkling comedy — this play crossed 100 shows, a record marked with a jashan at Colaba Agiary. “Parsi plays saw packed houses at multiple halls in the same evening,” Dolly recalls. “We performed early items till the revue’s interval and then rushed from Birla at Marine Lines to Bharatiya Vidya Bhavan at Chowpatty for our full-length play.”

Sam Kerawalla
When a merry bunch walked into Café Universal, at the corner of Adi Marzban Path, Basudev Rajak barely believed his eyes. The waiter from Jharkhand, clocking in 40 years of work for the restaurant, recognised Marzban’s veteran actors and technicians, gathered that July 2011 afternoon for the launch of a book on Parsi theatre of the last century. Pipe-smoking Marzban, who kept the city’s Gujarati-speaking communities in splits with 100 single act farces and longer Wodehousian imbroglios like Kataryu Gap and Gustadji Ghore Charya, jotted ideas and auditioned actors across Universal’s tables. “Guiding actors for their moves between chairs rearranged as if they were on stage, Saab would give me a lollipop, teasing, ‘Ghelo, aay le!’ ” His usual order? Mint tea with jam puffs, chicken patties and Rogers raspberry fizz.

Villoo Kapadia
That she has more distinct Marzban memories than many contemporaries isn’t surprising. Villoo worked exclusively with Marzban from her first play at St. Xavier’s College in 1948 till the 1970s. Though he graduated from Elphinstone College in 1933, Marzban joined hands with St. Xavier’s theatre buffs. The enthusiastic collegians pooled skills to present amateur plays for local charities. Co-operative Players, led by Marzban as writer-director and Pesi Khandalavala his producer, emerged from this informal circle as a tour de force unit. Back on campus for a shoot with Villoo, we discovered the Marzban loyalist was a photographer’s delight. Her gaze sweeping the quadrangle of her alma mater, she remarked, “Adi’s writing was of astounding calibre. Plays today are a travesty of both humour and acting. We need him more than ever.” 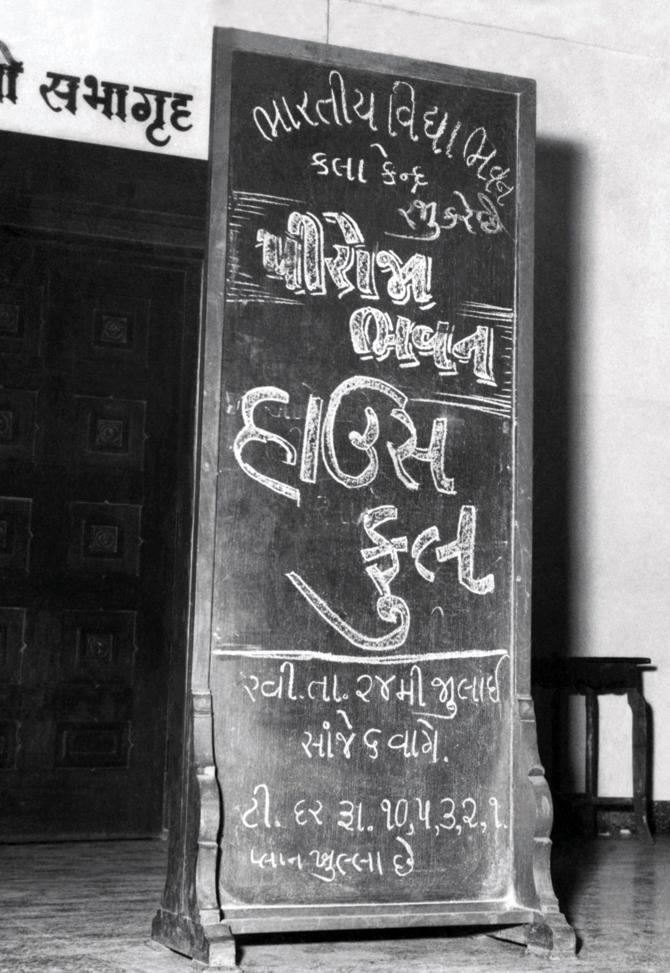 Piroja Bhavan
Marzban was introduced to Girish Munshi, son of Kanhaiyalal Munshi, trustee of Bharatiya Vidya Bhavan, by Burjor Patel. Under the Kala Kendra banner, Co-operative Players launched Piroja Bhavan, which proved to be a game-changer. Birthing a whole new stage lexicon of realism, the play catapulted the modern Parsi naatak to unprecedented success. In those days of five to six shows — considered decent business — this play’s first run stretched over 30 nights.

Next Story : I-Day Special: Eats that refuse to get off 'Specials' since 1947