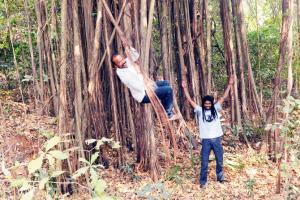 
The tribal chieftain of the Warli community in Aarey forest (let's disregard its present-day designation of a "colony") is a man named Prakash Bhoir. He lives in one corner of the 16-sq km area, and there is a traditional painting on the facade of his house of a leopard climbing a tree. This artwork depicts three Warli gods - Waghoba, or the leopard; Heerdev, or the tree; and Bhumata, the earth. Those are the deities that the tribal community worships for protection, sustenance, and life itself. But, this holy triumvirate is now under threat from a mortal adversary. The people behind the Metro project want to fell over 2,700 trees in Aarey to build a car shed, while the authorities in charge of Maharashtra's special Force One security team want a further slice of the pie for their headquarters. And all of this has made Bhoir a rather worried man. 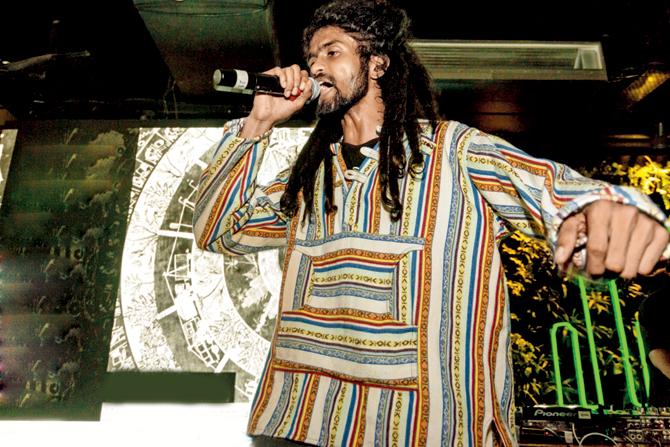 Sutar performs at the gig where The Warli Revolt was launched. Pic/Focusmonk

So, to build awareness about the need to conserve the area, the 50-year-old teamed up with local hip-hop crew Swadesi after a common acquaintance introduced them two years ago. And this led to the recent release of The Warli Revolt, a song that serves as a slap on the face of the powers that be. More than a plea to keep the Warlis' habitat safe, it is an ultimatum to the authorities that the community will protect what is rightfully theirs even if it means laying down their lives. The lyrics pull no punches. There are lines in the Marathi track that read, "Gor bole neta aate sungare/ Adivasan chhe ghar mane jhopare [Your politicians are sweet-talking scum/ Calling our adivasi homes slums]," and others that translate to, "Right now, at this moment, if I were to smear the soil of my land on my forehead, grab my weapon and show you my wild side, you will be faced with a massive revolution." Don't mess, in other words.

We catch up with Bhoir and Swadesi's Aklesh Sutar aka MC Mawali at the former's home in Kelti Pada, deep inside Aarey, to get a sense of what they hope to achieve with The Warli Revolt. To get there, we go off the main concrete road, walk down a mud track running through an extensive farm lined with banana trees, and finally cross a makeshift bamboo ramp to get to the house. There, sitting in the front yard under a chikoo tree that has raw fruit hanging from it, Bhoir tells us about how he doesn't view his activism as a fight against the government. Rather, it's his responsibility to his people and his land. And he also tells us about how, in the name of "vikas", or development, the authorities are carrying out "vinaash", or destruction.

Bhoir says, "Why do you think we made such an angry song when we could have made one about love for nature instead? It's because what is taking place here is grossly wrong. See, when you cut a tree, you aren't just felling wood. You are also displacing birds, lizards, spiders and the like. These creatures have as much right over the land as humans do. But they don't have a voice. They can't organise a revolution. And they don't vote. So, no one gives a damn."

Sutar, meanwhile, adds that he started writing the track in January 2018, finished recording it at a Malad Studio at the end of the year, and then Janmeet Singh created an animated video for it using typical Warli art. He also says, "While researching for the song, I studied tribal communities across the country - in Odisha, Manipur and the Andaman Islands, for instance. And I read about how a particular tribe in Andaman had never eaten rice or salt till a few colonisers introduced them to these things and changed their way of life. People who would eat what grows naturally in their forests were suddenly fed ripe tomatoes grown in a garden, and their bodies became weak as a result."

Bhoir concurs, giving us the example of his own Warli community, telling us about various wild plants that his ancestors ate that gave them natural immunity from different diseases. But then, the inauguration of a massive dairy in Aarey in 1951 turned the tide. All of a sudden, the land that the Warlis could call their own was almost halved. And subsequent projects - like a campus of the State Reserve Police Force in the '70s - reduced this share even further. Today, of course, we have the Metro car shed and Force One site.

But this time, the tribals aren't willing to take things lying down. Their revolution has remained restricted to andolans and music so far. But going by the lyrics of The Warli Revolt, Bhoir and his people are now willing to take more extreme measures if indeed the need arises, confident in the knowledge that if no one else, at least their gods are on their side.

Share
aarey colony things to do in mumbai mumbai guide

Next Story : Kathakali comes full circle at the Keli festival in Mumbai