On August 24, Tarique Garden building collapsed in a residential area of Mahad in Raigad district. Duste saved over 30 people, including children, but a concrete slab fell on his legs 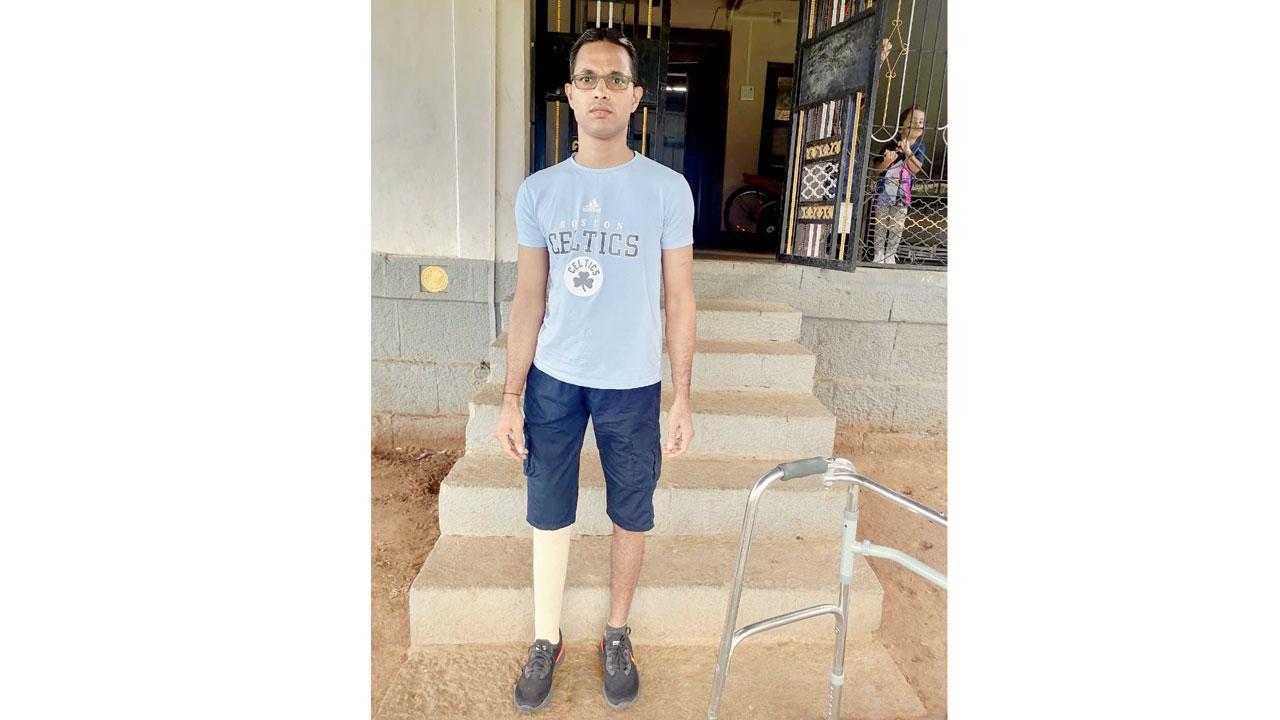 Naveed Duste stands on his new limb, outside his house in Juhi village, Mahad


Two years ago, Bollywood choreographer Farah Khan and actor Sonu Sood were moved by mid-day’s report about Naveed Duste, who lost his leg while saving more than 30 people during a building collapse. They vowed to sponsor artificial limbs for the Mahad hero, who returned home with a brand new prosthetic right leg on Friday.

On August 24, Tarique Garden building collapsed in a residential area of Mahad in Raigad district. Duste saved over 30 people, including children, but a concrete slab fell on his legs. Doctors had to amputate his right leg below the knee. mid-day reported about his heroic act and his struggles thereafter in a series of reports.

Also read: Sonu Sood: I will ensure that Naveed Duste gets back on his feet

Khan and Sood have honoured their promise and made Naveed atmanirbhar by helping him stand on his feet, again. Naveed got a new artificial limb at Surat, Gujarat, at the recommendation of Sonu Sood Foundation. “Sonu Sood has got it done, I just facilitated it. I am happy that Naveed Duste has finally become atmanirbhar and could stand on his feet once again,” said Khan.

Sood, who is currently in the US, told mid-day, “I am of the belief that every Indian should be there to help one another...and this is exactly what Naveed did [during the collapse]. He did not think of his own safety and rushed to save others. When Farah mentioned Naveed’s bravery to me, I promptly assured her of helping him. Almost two years later, when his relative contacted us, we referred him to the best centre in Surat.”

“I am happy that Naveed is back on his feet. He should now start a new beginning, with memories of his brave action,” he added. Sood said his foundation has so far “provided 160 limbs”.

During his treatment at Apollo hospital post the collapse, Naveed got an imported silicone prosthetic limb through charity. However, over the past six months, he started developing complications—fresh wounds emerged on the amputated leg, said Parvez Kauchali, 46, Naveed’s brother-in-law. The doctors at Apollo hospital diagnosed that there was bone growth from the residual limb, which was causing trouble and decided to operate on Naveed, once again, he added.

“Apollo hospital and the treating doctors provided free treatment and surgery to Naveed once again. In the recent surgery, they had to further amputate the leg up until the knee joint. The previous prosthetic limb was of no use hereafter. We then contacted Farah ma’am and Sood sir who were kind enough to help us,” said Parvez.

Naveed got his new limb in

Dr Rajesh Sisara, consultant prosthetist and Orthotist, Surat, said, “We have given him imported artificial prosthetic knee joints and a customised socket, which is indigenously made. Naveed will be able to use it comfortably. He may need to visit the centre in case of wear and tear after a few years.” “I was overwhelmed when I learnt about Naveed’s brave act,” he added.

On the price of the limb, Dr Sisara, said that what Naveed got is worth “a few lakhs of rupees... Usually, we provide prosthetic limbs that are around R19,000 and a little above, as most of the patients come from lower middle class and poor sections of the society and they cannot afford the costlier artificial limbs.”

“I am happy that I am back on my feet, once again. I am looking forward to supporting my family. I will soon start looking for a job, so that I can financially take care of my elderly parents, my wife Munira and educate my son Nayan well. I can only say thank you to mid-day, Farah ma’am, Sood sir and the doctors at Apollo hospital for all their support,” said an emotional Naveed.