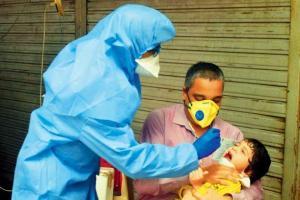 
Mumbai, which was the worst-affected city in the first three months of the coronavirus outbreak in India, has seen some relief in the recent days with the number of cases plateauing. Maharashtra health authorities are, however, very cautious and not letting their guard down due to the ongoing monsoon season and a major spike in cases in the surrounding areas of Mumbai. Fearing a second wave, the state government remains cautious in giving relaxations during the lockdown.

On Monday, Mumbai recorded only around 700 coronavirus positive cases, out of the 8,776 tests conducted, which is the highest testing figure in the city in a day. The 700 samples testing positive is the lowest in the last 100 days.

There were more happy tidings from the Brihanmumbai Municipal Corporation (BMC) which announced a recovery rate of 73 per cent and a case doubling rate of 68 days in Mumbai.

Sharing the good news in a series of tweets, state cabinet minister Aaditya Thackeray said ‘don’t let the guard down! Don't let your mask down! Only get numbers down!”

Mumbai will see more testing with chase the virus initiative of the @mybmc . It is also the only city to have liberalised testing and allowed citizens to “test at will”.
(2/n)

Chase the Virus model of Mumbai is being implemented in MMR region actively that has seen a ramping up of facilities in the past few weeks.
Along with MMR, rest of Maharashtra too is taking all efforts to tackle covid pandemic effectively

On Monday, the Maharashtra government had sanctioned an additional Rs 95 crore to tackle the deadly virus. Of the sanctioned amount, more than Rs 16 crore will be given to Mumbai city, Rs 40 crore to Thane, Rs 18 crore to Pune division, and Rs 5 crore to public health department.

For the fourth consecutive day, Covid-19 continued a downward trend in Maharashtra though Raigad notched the highest number of deaths, relegating Mumbai from the top three, while Pune Metropolitan Region overshot Thane in terms of total fatalities, health officials said on Monday.

The number of deaths in the state continued in the 200-plus range with 227 fatalities on Monday - but still lower than the single day's record of 298 on July 23.

With the fresh fatalities, the state's death toll went up to 13,883, while the total cases rose to 383,723 - both highest in the country. According to Monday's figures, there was one death roughly every 6 minutes and a stupendous 330 new cases every hour.

The state recovery rate increased for the third day from 56.74 per cent to 57.84 per cent on Monday, while the current mortality rate stood at 3.62 per cent.

The Health Department said that of the total cases till date, 147,592 are active. On the positive side, 8,706 recovered patients returned home on Monday, taking the total number of discharged patients to 221,944.

Of Monday's fatalities, Raigad district notched the highest 47 deaths, followed by 45 in Pune and 40 in Thane, leaving Mumbai trailing behind on the fourth slot - first time since the outbreak of the pandemic.

Besides, there were eight fatalities recorded in Kolhapur, six in Jalgaon, five each in Nashik and Aurangabad, four in Satara, three each in Palghar, Solapur, and Nandurbar, two each in Ahmednagar, Sangli, Latur, Beed, Nanded, Ratnagiri and Nagpur, and one each in Dhule, Hingoli, Osmanabad, and Amravati, as well as one from another state.

The MMR (Thane division) remains on the edge with the current toll increasing by 129 to touch 9,154 and a staggering 3,110 new cases, pushing up the number to 227,376. Thane's cases have touched 87,790 with 2,386 fatalities to emerge as the second worst-hit district after Mumbai in the state.

Continuing the trend for the second week, all the eight divisions recorded fatalities on Monday, while Chandrapur still remains a zero-Covid-death district.

Meanwhile, the number of people sent to home quarantine increased to 922,637, while those in institutional quarantine went down to 44,136 on Monday.