Coronavirus: At over 7,000, K East ward has most cases in Mumbai 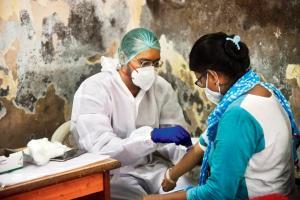 A health worker collects a blood sample of a woman for antibody testing in Dharavi on Monday. Pic/Pradeep Dhivar

Mumbai's daily COVID-19 infection count continued to hover around 1,000 and deaths reduced to 39 from 57 a day before. Of the 7,924 new cases the state recorded on Monday, 1,021 were from the city. Thane, Navi Mumbai and Kalyan each had more than 300 cases. 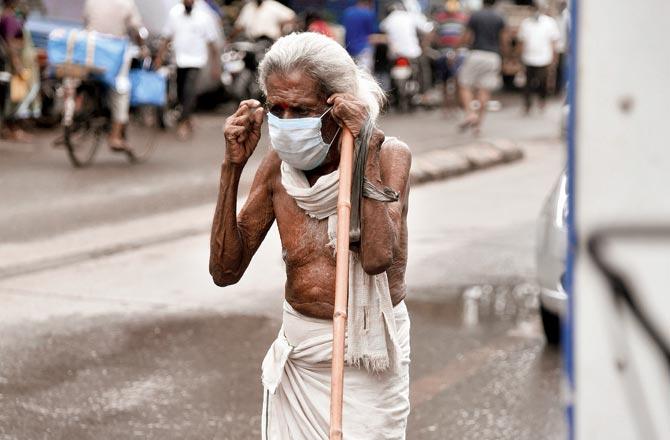 A senior citizen adjusts his mask, at Dharavi on Monday. Pic/Pradeep Dhivar

A total of 1.47 lakh COVID-19 patients are currently under treatment. State health department officials said the state's recovery rate has improved by 2 per cent to 58 per cent. On Monday, 8,706 patients were discharged after full recovery across the state, while 1,706 in Mumbai were sent home after they recovered. The doubling rate of infections in the city stands at 68 days.

Though Mumbai saw a dip in COVID-19 casualties on Monday, its share among the 227 deceased across the state was the highest, followed by 30 in Pune, 28 in Raigad district and 19 in Panvel. As many as 15 more died in Pimpri Chinchwad, 13 in Thane, 11 in Kalyan Dombivali, eight in Kolhapur, seven in Navi Mumbai, six in Jalgaon, five each in Nashik, Aurangabad and Bhiwandi, four in Satara, three each in Ulhasnagar, Vasai Virar, Solapur and Nandurbar, two each in Ahmednagar, Sangli, Ratnagiri, Latur, Beed, Nanded and Nagpur and one each in Mira Bhayandar, Dhule, Hingoli, Osmanabad, Amravati and one was a resident from another state.

In the city, civic officials said that out of 39 deaths, 23 deceased suffered from other ailments, and 26 were senior citizens. While the state's recovery rate grew by more than one per cent to 57.84 per cent, Mumbai's recovery rate continues to be at 73 per cent. The state's mortality rate now stands at 3.62 per cent.

Next Story : COVID-19 in Mumbai: Now, get a lung scan at a van outside your building