Migration of a bearded bird

Writer and wildlife conservationist Maruti Chitampallis 45 years in Vidarbhas forest made wildlife lovers and Marathi literature richer. The bird lovers migration to his native Solapur leaves a void in his followers hearts 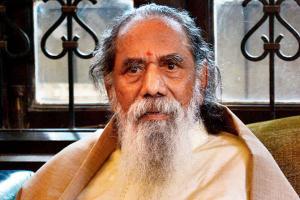 Maruti Chitampalli, 88, shares an immortal bond with the forests. He taught us how to read the jungles — their biodiversity, the habitat of all living organisms — the wildlife and the Adivasis. He walked the length and breadth of Vidarbha's forest areas and documented them in a vast collection of books. He loved the forests. October 11 marks the bird lover's migration from Nagpur to his native Solapur, a place that wasn't really on his mind as a retirement abode. His friends and well-wishers, most of whom are my good pals, gave the octogenarian a warm send-off on Saturday. Moist eyes and choked throats summed up a 45-year stay in a forest-filled Vidarbha.

Reading politics all the time could be as boring as watching a dud web series in the time of the pandemic. This time around, I'm bringing you a story of a retired deputy chief conservator of forest, who turned himself into an acclaimed writer and impacted our lives with his work without making much ado about it. In his 45 years in Vidarbha jungles, which included the years in service and post-retirement till today, he studied birds, animals, trees, fish and the lives of several tribes and Adivasis. He has made Marathi language richer by adding one lakh new words, all of them coming from the languages the tribes of Madia, Korku and Adivasis in Vidarbha's zadipatti forest areas speak. These words help in understanding the forest and wildlife. Do you know how a tiger smells? Do you know how a bear smells? Chitampalli may have all the answers. Among his 25 much-acclaimed books, he has authored comprehensive thesauri on birds, trees, animals and fish for which he stayed in Konkan's fishing villages. A grand recognition came in 2006 when he was elected the president of All India Marathi Sahitya Sammelan, putting him in the hall of fame of Marathi literature. His contribution to Navegaon National Park, Nagzira Sanctuary and Melghat Tiger Project has been hailed. He was consulted for developing Karnala Bird Sanctuary and constructing orphanages for displaced wildlife.

We, the Nagpurians, call Chitampalli Aranyarishi (the sage of forests). His studious approach towards bird-watching and the books he authored on the subject, qualified him to be an ornithologist, but with a difference. One has to read his books to experience the novelty. At times, we would compare Chitampalli with a legendary Salim Ali, because both worked in the same area of interest, and the former considered the latter his guru. I was fortunate to get initiated into reading the guru and chela during my school days. I did not have an opportunity to meet Ali (he passed away the year I was in junior college), but Chitampalli was a 'kaka' next door for most of us during the college days and the early stages of my career in Nagpur.

Much has happened in the past 30 years. Chitampalli's bond with eastern Vidarbha grew much stronger. He stayed put in Nagpur despite having to face emotional breakdowns following his wife's and only daughter's demise. The people who he mentored into a forest-wildlife conservation loving community took care of him like their own family. Several senior journalists from Mumbai would recall their interaction with the legend who would take them on walks through the forest. Be it Navegaon Bandh, Nagzira, Pench or Melghat Tiger Project, Chitampalli never shied away from sharing knowledge with others. One of his mentees, Anil Gadekar, who gathered the friends to bid farewell, recalled so many events that can't be described here for lack of space. The author added a clause in his will that Gadekar and Makarand Kulkarni, who published Chitampalli's books, should perform his last rites. "I'm wrecked emotionally," said Gadekar from Nagpur.

Apart from his books, Chitampalli has left another legacy for the jungle lovers. A bungalow he built on land given by his mentor Madhavrao Patil (of Navegaon Bandh) has been turned into a museum. Patil, a hunter-turned-wildlife expert, made Chitampalli fall in love with the natural treasure. Chitampalli returned to Nagpur (from Navegaon) within six months after retirement because power interruptions and difficulty in sourcing reference material had become a major problem for his writing job. Recently, Wardha's Central Hindi University (which is close to sanctuaries, national parks and tiger reserves) used his skills for its students. "It is very difficult in India to research and discover. But Vidarbha's forests and people made something substantial possible for me. Forty-five years is a long journey that has made my life richer with every experience. I can't define the moment, but I say I feel very sad about leaving all this behind. But then, I need someone closer to me 24x7," he said in a video message. He will be staying with a nephew in Solapur.

Does he expect Solapur to be as exciting as his favourite forests? "Frankly speaking, I don't have the energy to walk through the forests. But I can surely go through my diaries I wrote in 45 years to author many more books. It is the habit of writing a diary that makes one a good writer," he said. What will he tell the newcomers to the field? "I don't think advising them is useful. They just take pictures, but don't study the species they find," he said, showing a rare hint of disappointment in his moist eyes. Meantime, the forest lovers of Vidarbha haven't stopped hoping for the reverse-migration of the bearded bird