After a thorough investigation, he confessed to stealing motorcycles from Andheri, Meghwadi,Goregaon, Amboli and Malad. POlice have seized 10 bikes from him 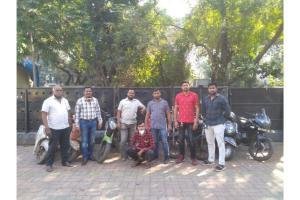 
A delivery boy was arrested for stealing a motorcycle from a parking lot in Versova on Sunday morning. The accused has been identified as Aadi Afzal Shah alias Ahad (20). Versova police have seized 10 motorcycles from him. Ahad told the police during investigation that he had stolen 20 to 25 bikes.

According to police, two motorcycles were stolen in two days in Versova last month. A case of theft was registered at the Versova police station.

Senior inspector of police Raghavendra Thakur formed a team and started investigation. They examined the CCTV footage of the area and saw Ahad stealing the bike. He was arrested. After a thorough investigation, he confessed to stealing motorcycles from Andheri, Meghwadi,Goregaon, Amboli and Malad.

“Ahad works as a medicine delivery boy. He stole a motorcycle from the parking lot in the morning. An investigation has revealed that he also sold parts for a motorcycle,” a police officer said.

"Police have seized 10 motorcycles of different brands from Ahad, the price of these motorcycles is around Rs 2,75,000," added Thakur.

He was produced in court and was remanded to police custody.