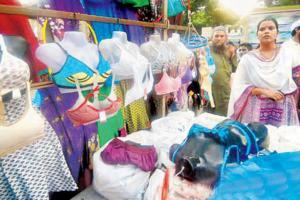 
After the controversy over the display of lingerie on mannequins hit the BMC yet again last week, a decision to act against illegal street vendors displaying it was taken. The Federation of Retail Traders Welfare Association (FRTWA) has, however, complained to BMC Commissioner Pravin Pardeshi regarding BMC officials entering licensed shops and asking them to remove the display.

On Saturday, an Inspector of Shops and Establishment of BMC's G North ward visited some shops in Dadar West instructing them to remove mannequins with lingerie on display. The shopkeepers thus demanded answers to whether there was a law regarding such checks and alleged that the BMC officials were harassing shop keepers.

During a law committee meeting at the BMC last week, the old issue of lingerie displayed on mannequins was brought up for discussion. While there is no rule that allows the BMC to implement such a proposal, the corporators insisted that at least illegal vendors carrying out such business and defacing the city by the unorganised display be acted against on war-footing. There were also suggestions to take action against the display of lingerie outside shops.

Former BJP corporator Ritu Tawde had first brought up the issue in 2013 but nothing had changed then. Shiv Sena corporator Sheetal Mhatre said, "We instructed shops and establishment department's inspectors to act against this immediately and take action against illegal sale across the city." But the instructions were probably misunderstood, alleged FRTWA members.

They further told mid-day said that if such a proposal is approved, they will approach the court against this as displaying clothing to attract customers is a practice worldwide. Viren Shah, FRTWA president, said, "The inspectors randomly visited the shops that are over 50 years old and asked them to remove the clothing on display but world over lingerie is displayed on mannequins to attract customers and there is nothing wrong in it. If such a law is passed, we will knock the doors of the court. There are over 5,000 such lingerie stores in the city where businesses might get affected."