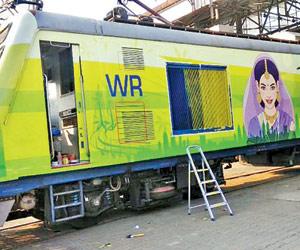 
"With an objective to maximise the visual comfort and reduce energy use, natural sunlight tubes and sun pipes have been recently installed at the Mumbai Central station concourse, which provide natural, cool and effective lighting during the day. It illuminates every nook and corner," WR chief spokesperson Ravinder Bhakar said. He said the idea behind introducing this lighting system is in sync with the Ministry of Railways' assertion over the use of renewable sources of energy to bring down the greenhouse emissions, energy bill and carbon footprint.

"This is the first ever experiment by any railway zone in the country," Bhakar said. Eighteen units of natural sunlight tubes have been installed at the Mumbai Central Terminus. Each unit costs Rs 21,000 and the total amount spent so far has been Rs 4.46 lakh, he added. The WR also plans to install similar tubes at other
stations and places as well, he said.

"Since this kind of light source has numerous benefits, we have planned to extend such lighting arrangements to workshops, sheds and other stations on our networks and feedback will be taken from the passengers during the monsoon season," the official said.

(Edited by mid-day online desk, with inputs from PTI)

Next Story : Mumbai rains: BMC will not put protective nets under manholes in the suburbs