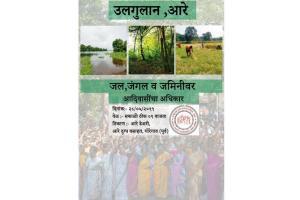 The tribals will be carrying this poster during the protest march today, and they also plan to put up copies of this at all adivasi padas of the area


The tribals of Aarey Colony have been demanding some basic facilities from the government – electricity, water supply and clean toilets – but definitely not at the cost of the place they have been living in for generations.

Considering the fact that it is difficult to provide these facilities in the tribal hamlets, the government plans to resettle and rehabilitate them to 480-square-feet houses to be developed on a 5-acre plot identified for the purpose. However, Aarey's tribal leaders told mid-day that they don't want to be shifted elsewhere and would prefer the facilities in their padas. In order to oppose the same, they have organised a protest march today.

Though most of the 27 tribal padas in Aarey have received electricity supply, Navshyachapada located on the premises of Bombay Veterinary College (BVC) is yet to get the amenity. According to sources, the college hasn't given a no-objection certificate for the purpose. A total of 3,000-3,200 families staying in these padas will assemble near Aarey Dairy Office today morning and kick off the protest march. They will then move towards Aarey Market and take the Aarey main road towards the BVC office, where they will meet the officials to raise the issue of electricity.

"It's been more than 50 years now but the government has failed to provide electricity and water connection in Navshyachapada at BVC. This is happening because the BVC authorities are not giving the NOC. We will meet the officials and request them to solve the issue at the earliest," added Bhoir.

Another tribal said, "Adivasis have been cultivating their lands for generations. We want to protect the lands and also the trees that we have planted. Projects introduced in the name of development are destroying Aarey's ecology. Stop all of them and protect the forest. We have been staying in the Aarey forest area even before the Aarey Dairy Milk Colony came into existence. For us the forest is like our God and we worship nature."