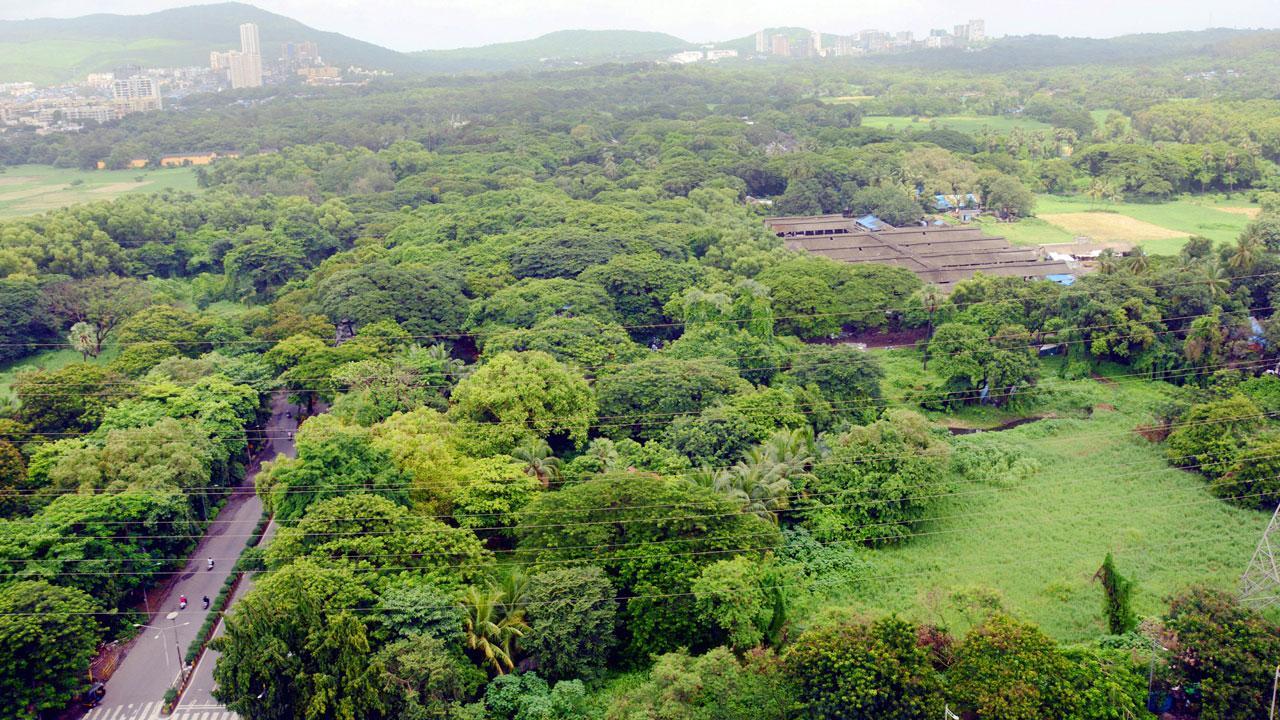 Aarey colony is home to hundreds of wildlife species including vulnerable animals like the leopard and rusty- spotted cat. Pic/Satej Shinde


A day after his rebel general Eknath Shinde was sworn in as the Maharashtra CM, Shiv Sena president Uddhav Thackeray raised questions over politics and policy decisions that he had taken but are about to be altered by the new government, particularly the shifting of Metro 3 car shed from Aarey to Kanjurmarg.

Speaking at the Sena Bhavan on Friday, Thackeray opposed the new government’s move to construct a Metro 3 car shed on Aarey land. “I’m deeply saddened because of the decision on the Aarey car depot. Don’t make Mumbai suffer because you are angry with me. Don’t stab the city. I request you to not shift the depot from Kanjurmarg to Aarey which is a wildlife hub. Don’t play with Mumbai’s environment.”

He said the land issue could be resolved easily because both the state and Centre are now controlled by the same parties. “It was the first decision as the CM. I stayed the construction at Aarey and shifted the depot to Kanjurmarg because of environmental reasons. I’m with environmentalists. It is not private land. The Kanjur issue can now be resolved because both state and central governments are yours [BJP],” he stated further. 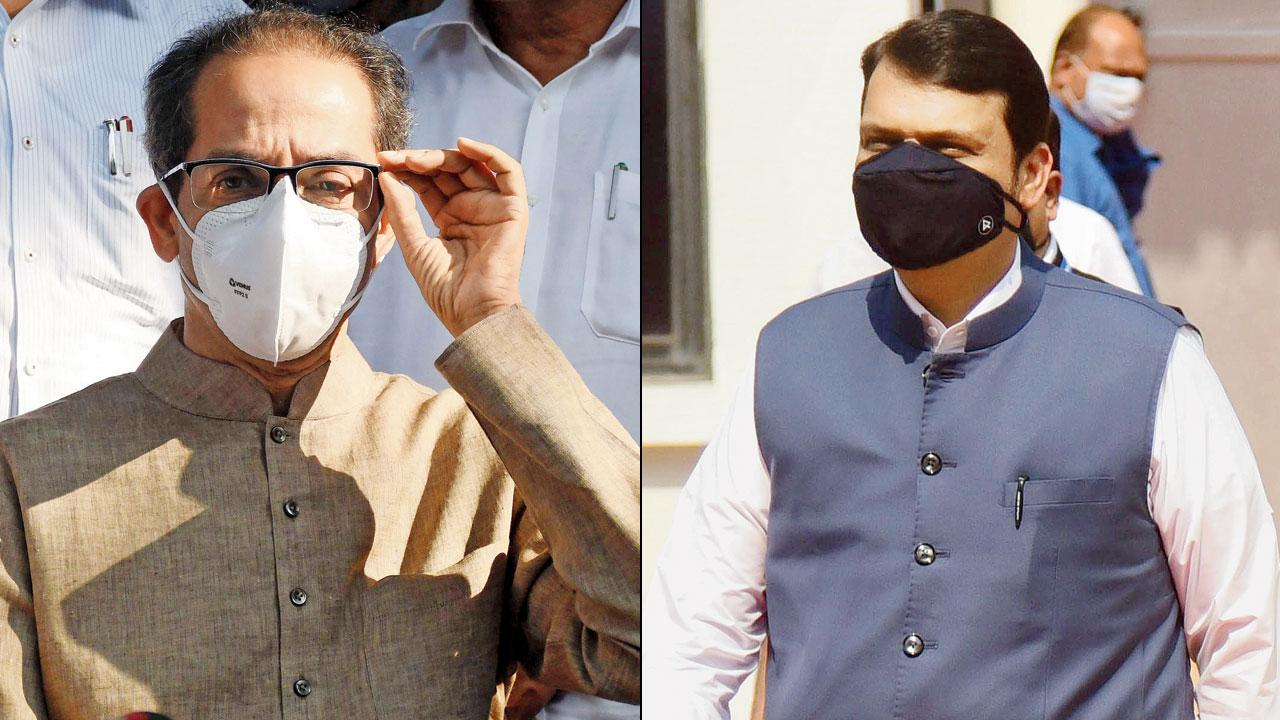 The former CM said it was his sincere request to save Aarey land which has wildlife. “The wildlife is seen there. The trees were cut previously but the felling stopped. We have videos and photos confirming the existence of wildlife. When movement starts there the wildlife will vanish and later you will be able to go even deeper into the forest land. My government reserved a forest within the city.”

The Aarey issue had become a bone of contention between the BJP and Sena before the 2019 polls. The Sena president’s son Aaditya had fully supported the ‘Save Aarey’ mission. The Sena government had changed the decision at its first Cabinet meeting. The alternative Kanjurmarg site has been disputed in court. In its first Cabinet meeting, the Shinde-Fadnavis regime ordered the reversal and asked the government’s lawyers to submit in court a say in accordance with the past decision for having the car shed at Aarey.

The ex-CM said the situation in which Shinde was made the CM could have been averted had the BJP accepted his demand for sharing the top office for two and a half years each after their alliance was voted to power in 2019. “Now the BJP will not have its CM for five years,” he said, adding that the MVA’s existence was not needed if the agreement was honoured by the BJP. 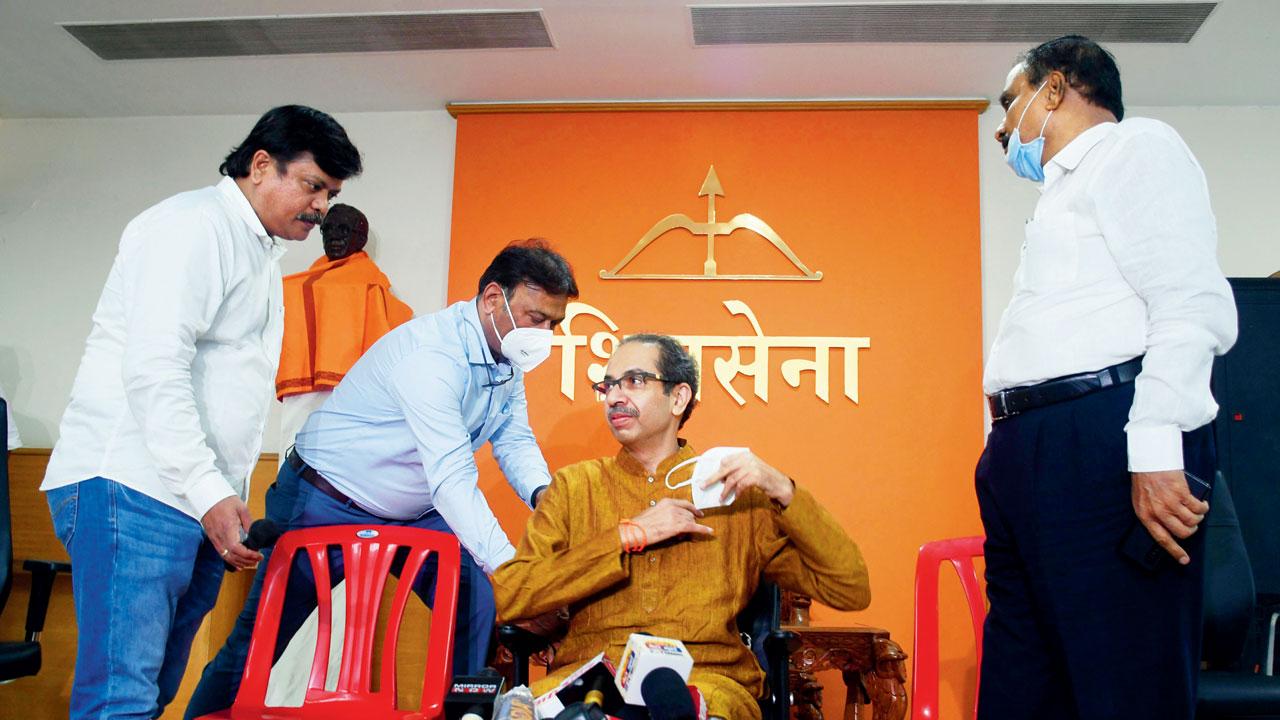 Ex-CM Uddhav Thackeray gets ready to address the media, at Sena Bhavan, on Friday. Pic/Ashish Raje

“According to those who formed the government, a so-called Shiv Sena worker has been installed as the CM. I had been telling the same in 2019. And it was possible then. Two and a half years would have been completed now and everything made possible honourably,” he said, refusing to accept Shinde as a Sena worker. “Why did they disagree then and rejected the proposal? Amit Shah had given me a word, but he did not keep it. There cannot be a Sainik in the CM’s office by keeping the Sena out.”

Right to recall the elected

Thackeray reiterated his father’s demand for recalling elected public representatives if they dishonoured the mandate. He added, “People should know where their vote goes, who do their elected representatives stand with. The Sena Bhavan stands in Mahim. Look where Mahim’s vote has travelled from Surat to Guwahati to Goa [Sena’s Mahim MLA has shifted his loyalty, so have 38 others).”

Thackeray has appealed to the four pillars of democracy to save the country’s constitutional set-up. “All four pillars should come forward to save democracy which is being mocked at. The vote is on sale. People will no longer believe in democracy.” Fadnavis, who planned and executed Metro 3 with its car shed in Aarey as the CM during the BJP regime, said the site had been approved by the high court, the Green Tribunal and the Supreme Court.

“About 25 per cent of the work is done and the Metro can run as early as possible with a car depot at Aarey. The remaining work can be completed soon,” the deputy CM said. Whereas, it would take at least four years to complete the depot at Kanjurmarg, he added. “If Metro 3 has to run soon, the car depot must be at Aarey and it is our decision.”

Fadnavis said he had urged Thackeray not to shift the site, “but it became an ego issue. It’s not about tree felling. If it was about this, how come builders in the same precinct were allowed to cut trees?” he asked.

Bhide to be back?

Sources said the Mumbai Metro Railway Corporation could have its former CMD Ashwini Bhide back in command. Deputed by Fadnavis during his tenure, Bhide had pushed the project hard and locked horns with Aaditya Thackeray over the protests. They fought a prolonged war on Twitter when he jumped the wagon of environmentalists, and took up the cause after becoming the environment minister. Then, the car depot site was shifted and so was Bhide, who after a brief insignificant stint, was appointed in the BMC as one its additional commissioners.

Next Story : Aarey Metro car shed: ‘Mumbaikars will take to the streets again’