Borivli building collapse: They saw cracks forming and escaped in the nick of time

Five flats in A wing of Borivli building were occupied till Friday morning; revamp stalled due to bickering members 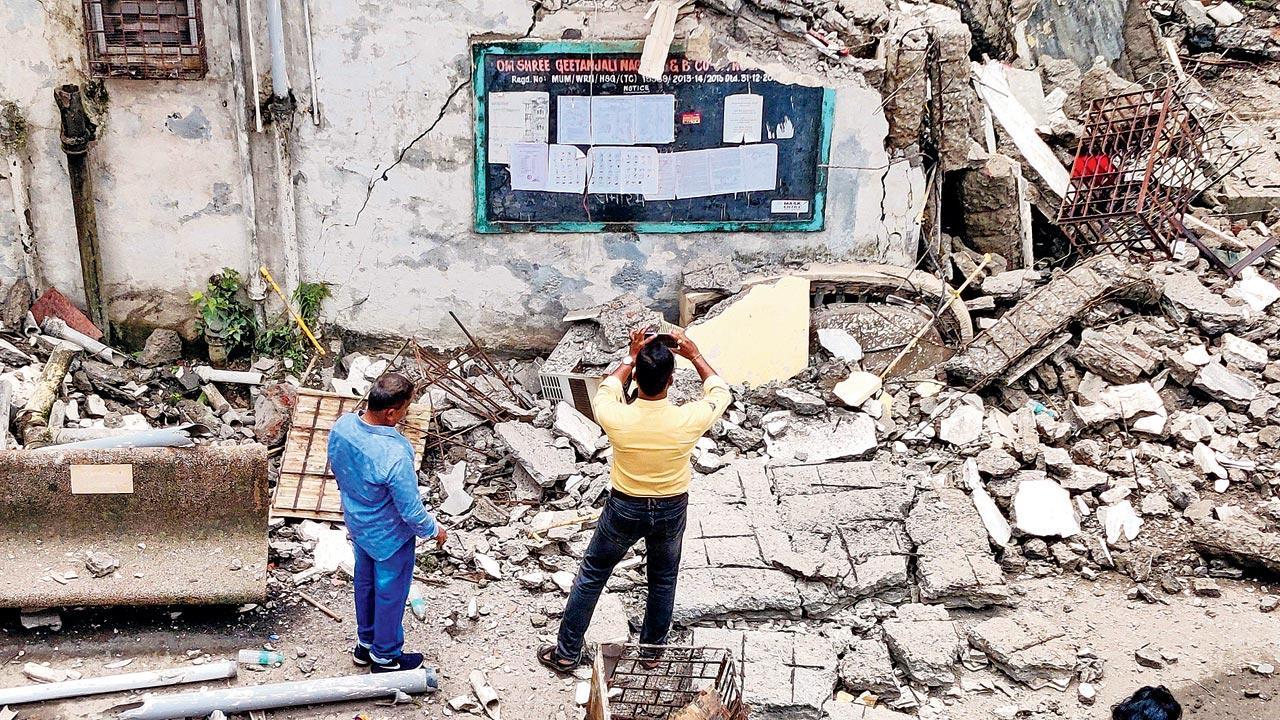 
When Deepak Mandekar saw a gaping crack in his neighbour’s wall around 10 am on Friday, his family decided to vacate their home in the A wing of Om Shree Gitanjali Nagar Society, Borivli West. Around 1 pm, Mandekar and his wife saw off his mother and son.

Just as they turned around to collect their belongings, the four-storey structure, whose redevelopment was stalled due to bickering members, sunk like a stack of cards. No one was injured in the crash, though the household goods of a few residents got crushed in the collapse. Authorities asked the residents of three other wings of the society to leave their homes at once. 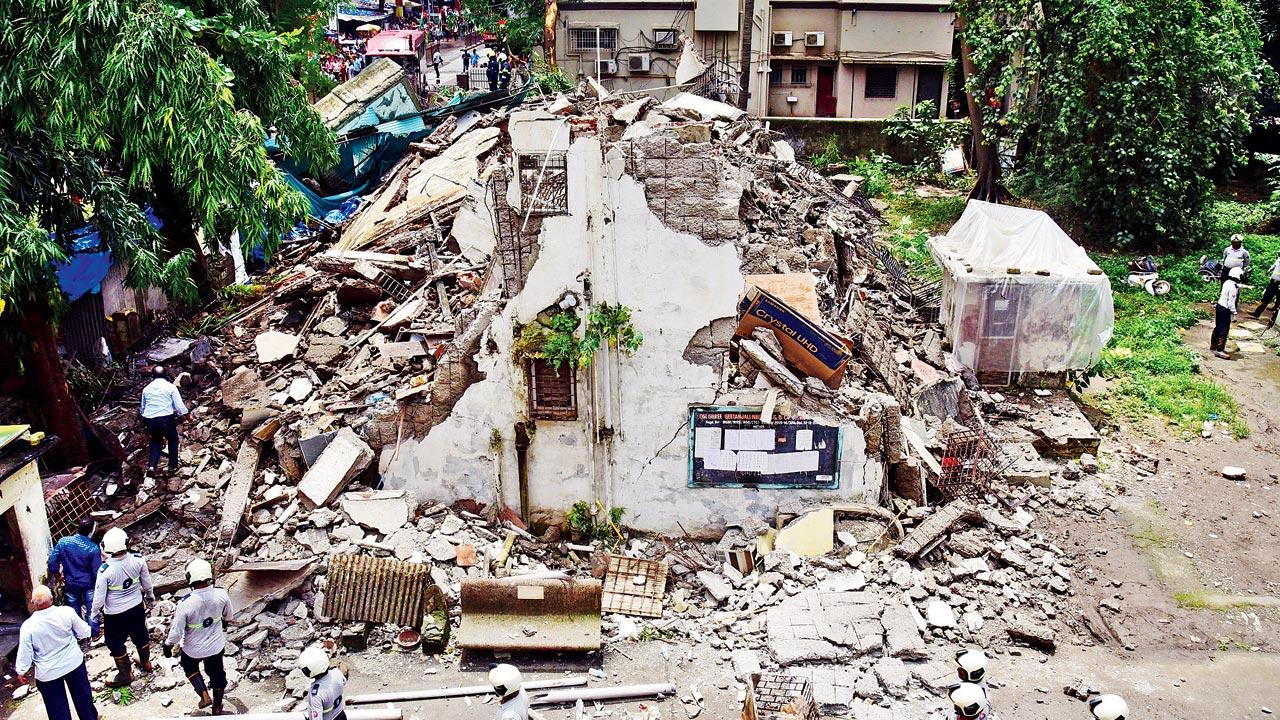 Residents of the A-wing were alarmed after seeing a huge crack in flat A-02. Pics/Nimesh Dave

Sources said the BMC had declared the building unsafe and asked the residents to move out, but a few members got a court order in 2020 and continued to live there. The building came up 40 years ago. Last month, a building in the vicinity was evacuated after a pillar started crumbling.

“A few families stayed inside, but some of them noticed cracks in the building in the morning and decided to vacate the flats. So there wasn’t anyone inside when the incident occurred,” said Bina Doshi, ex-local corporator. 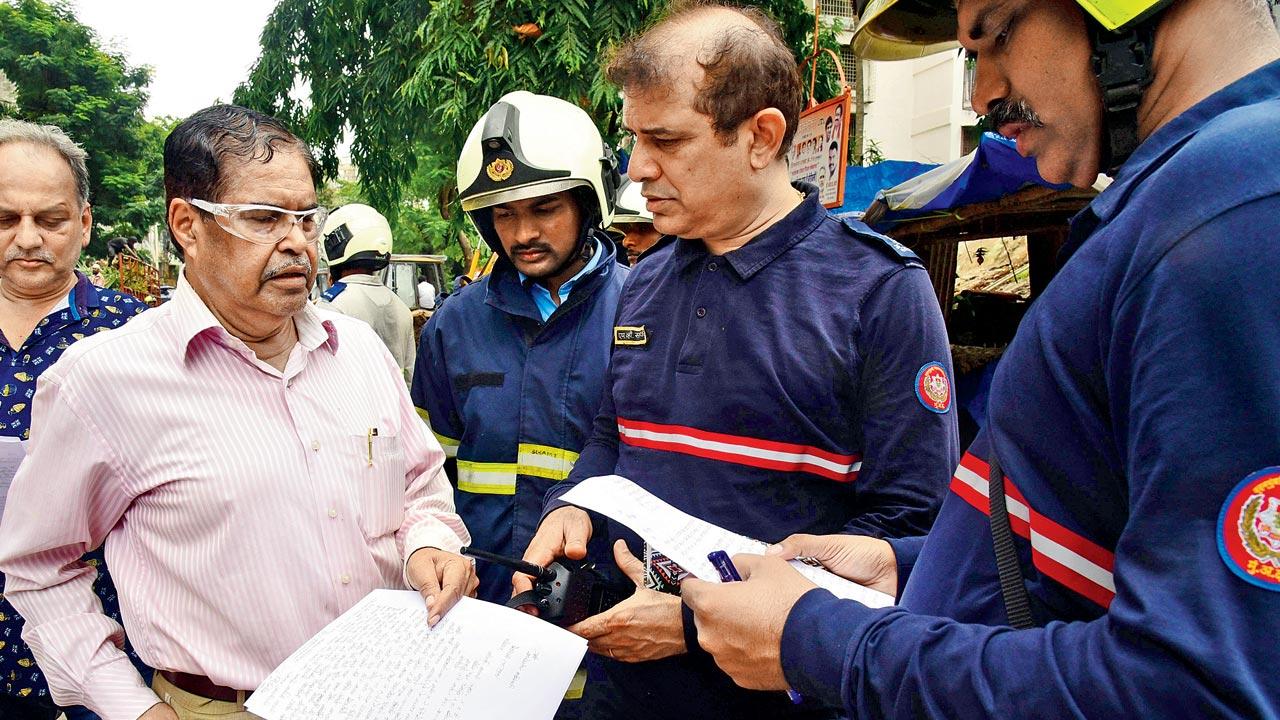 Mandekar, who lived on the ground floor at A-02, said he thanked his stars for the providential escape, but all their belongings are gone. “After we saw the huge crack in our neighbour’s [A-01] bedroom wall at 10 am, we started packing hoping to leave the place by 1 am. My wife and I came outside to see off my mother and son who were heading for my brother’s home. As we turned to take our bags, there was a huge sound and the building collapsed in front of our eyes, burying all our belongings,” said Mandekar.

A wing had 9 flats of which five were occupied till Friday morning. Nearly 30 families lived in the other three wings.

“Though we were in favour of the redevelopment, some members were against it. They went to the court and got a stay order promising to take responsibility if something happened to the building. But the irony is they don’t live here. Instead, they put our lives at stake,” said Mandekar.

Shweta Jain, a resident of the B wing, was equally upset. “Now someone has to take the responsibility for the incident. What happens if someone gets injured or something worse happens?”. She, her husband, in-laws and two son sons moved to another place two months ago. Jain said, “The condition of our wing is worse than A wing. The newspaper boy and milkman are afraid of entering the building. We were waiting for redevelopment, but as nothing was happening we left the place as our lives are more precious. Now we are staying on rent.”

Following clashes between two groups, an administrator was appointed a month ago. The re-election for committee members was announced and it was supposed to be conducted on September 4. Former secretary Chandrakant Orlekar said, “The society members were trying for redevelopment since 2017, but a few of them were against it. I tried my best to convince people for redevelopment.”

The 2020 court order restrained BMC from taking strict action. “The BMC notice is still on the noticeboard of the collapsed building. The residents from the other three wings were instructed to vacate their flats as they are no longer safe. The BMC has arranged a stay at the nearby school for those who cannot get another accommodation immediately,” said Sheetal Mhatre, ex-corporator.

A tragedy was averted in the vicinity last month. A portion of one wing of Sai-Dham Housing Society at Saibaba Nagar crumbled on July 9. The residents said that the complex was about to be redeveloped. A few members had objected to the builder’s plan, but the latter never responded to them.

40 yrs
Age of the building