What if our employers never call us back, ask house help in Maharashtra 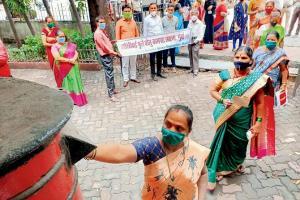 Hundreds of domestic workers take part in the campaign at Chembur. Pic/Rajesh Gupta


Even as the government gradually opens up the state, workers from the unorganised sector, primarily house help, continue to face the brunt of the pandemic. As their employers refuse to call them back and absence of proper guidelines affect their return to work, domestic workers started a postcard campaign on Sunday demanding Rs 10,000/month from the government till the infection remains.

The pandemic has rendered most of them jobless since April this year and about 25 per cent of them have been removed from work, most of whom are above 55 years of age. According to them, the government only provided rice and pulses at some places, which were not enough for them to run their families. 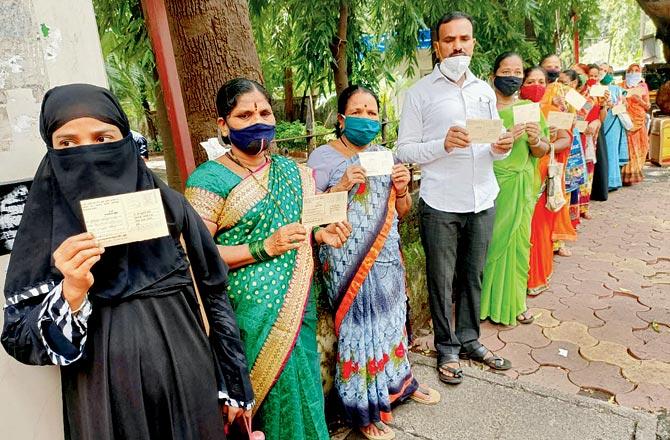 Speaking to mid-day, Dnyanesh Patil, state coordinator for Rashtriya Gharelu Kamgar Chalwal, said, "Both the National Domestic Workers Welfare Trust and Maharashtra Rajya Gharkamgar Union, which are registered organisations, had raised a demand in support of the domestic workers before the development commissioner of Maharashtra Domestic Workers Welfare Board on June 28, but there has been no response till date."

Also Read: Cop helps domestic worker, who recovered from COVID-19, get her job back

"Lakhs of maids from across the state are in a very bad condition. They are taking up whatever work is coming their way to run their families. About 4.5 lakh domestic workers are registered under the government. At least it should start helping them," he added.

As part of the campaign, hundreds of domestic workers sent their postcards to Chief Minister Uddhav Thackeray, at Chembur, on Saturday. A worker, Manisha Mhatre said, "It's been almost four months. What if my employer doesn't call me back for work? Now, the government is our only hope."

Savita Pandit, who lives at the Vashi naka, said, "I have only got my March salary and have not received any food or ration all these months. I'm not sure whether my employer will call me back. We are now trying to form a self-help group because we don't want to die of starvation. Employers think we will be carriers of the virus. Till the time this fear is there it's difficult for us to earn our livelihood.
Our hopes lie with the government now."

Next Story : With 80 per cent cases in high-rises, BMC issues diktat